This week I've been taking a break from bike commuting- the weather has been awful, and I'm trying to recover from this not fun bronchial aftermath of the flu. Plus, there is much preparation to be done for our gigantic pirates vs ninjas party and that means meeting Chad in the evenings to run party errands.

A few observations about Light rail- first, ridership is growing. I'm amazed by how many people are getting on during rush hour, especially at the Beacon Hill station. Evidence captured by the iphone: 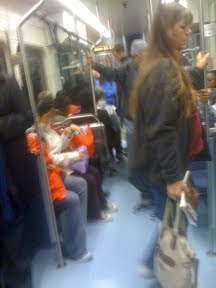 Second, the murals popping up in SoDo along the rail line are living, evolving peices of art. One this morning encouraged passers by to vote, while another has incorporated lit up electric signs. Many of the murals have distinctive Seattle themes- mountains, apples, recycling.

The fact that so many murals have spring up along the light rail line got me wondering if there was some kind of organization behind this realization in the arts community of a new audience passing through roughly every 7 minutes. Indeed, it turns out that the SODO Business Association started Artworks in 1995 to use murals as a way to beautify the neighborhood. They developed the SODO Urban Arts Corridor as a way to give the public an extra large dose of public art. Here's a map of the area: 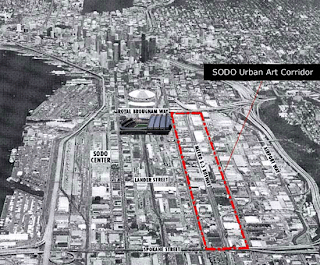 Definitely worth checking out. Also, it turns out that Artworks was recognized by Sustainable Seattle with a SCOLA award in 2003 for their great work in social justice. Notice who else is on that list? That's right, Beacon Dev Group!!! For our work in creating a sustainable built environment. I'm so proud of us (even though this was way before my time... :-) ).
- Posted using BlogPress from my iPhone
Posted by Megbikes at 8:49 AM