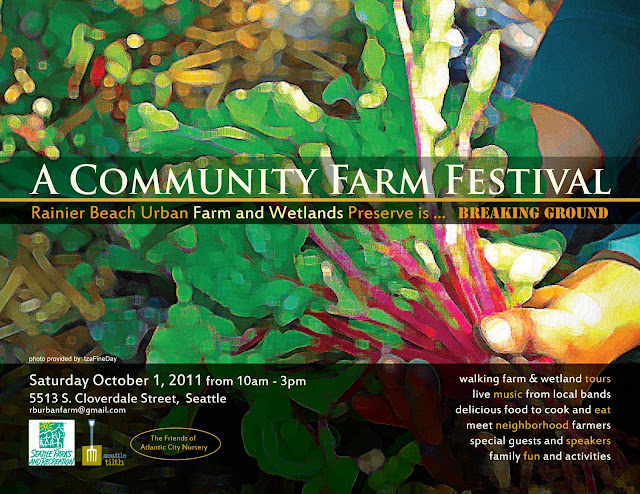 Saturday, October 1 was the official ground breaking of the Rainier Beach Urban Farm. The other FACN board members and I have been really busy over the past 8 months getting this neighborhood farm project off the ground- writing grant applications, negotiating operating agreements with Seattle Parks, and also figuring out the details of our relationship with Seattle Tilth, our fiscal sponsor.  Although there have been work parties every Saturday for most of the summer and fall, this was really our first public event.  The concept was a mini-version of the Seattle Tilth Harvest Festival, but with more of a focus on this particular farm.  We envisioned farmers market style vendors, a plethora of community organizations, tours of the farm, live music, and plenty of kids activities. We had no idea how many people were going to show up, and whether the event would be a success, but we set attendance goals that we thought were reasonable, settled on a budget, then put our heads down and got to work.

My job was to recruit organizations to table, bands to play music, and farmers to sell produce.  Other committee members handled a ton of other details, including speaker/ elected official recruitment, volunteer coordination, event promotion, poster/ graphic design, food/ flower procurement, event logistics and layout. A lot of these jobs were new to us, but we just kept plowing through to do lists and meetings, and pretty soon it was the week of the event.  Saturday morning greeted us with rain, which fueled my anxiety that no one would show up.  Like magic, however, over 40 volunteers materialized, and got to work setting up. By 10am people started trickling in, and for most of the day we had a good sized crowd there despite the weather.

We had three farmers set up to sell local, organic produce. Two of the farmers, Juma and Ramadan, are participants in Seattle Tilth's Farm Incubator Program, a farm training program which provides education and farm business training to immigrants, refugees and other underserved families in South King County.

These farmers started farming less than 6 months ago at Tilth's United People's Farm in Kent, and already they are selling produce to PCC, Central Co-Op, and a number of boutique restaurants and small grocery stores.  I was amazed by how beautiful their produce looks, and what rapid success they are having.  Apparently farmers who make it through the training program will then have an opportunity to rent land and equipment at subsidized rates, making this training a viable model for economic opportunity and empowerment for these program participants.  I bought a ton of striped beans, some herbs, and some turnips- I just couldn't resist this gorgeous produce.

Mayor McGinn was apparently also impressed with the selection- here is he purchasing some greens from one of the farmers.

The other farmer selling produce was Hand Farmed Organics, a community supported farm in Fall City, WA.  One of the owners of the farm, Casey Paul, actually lives in Rainier Beach and does a reverse commute out to his land.  These guys have a new operation, also, but the produce is some of the most beautiful I have ever seen and they do an outstanding job with their displays.

I took home a sugar pie pumpkin and some winter squash as well as some potatoes and greens.  Everything was delightful!  We made pumpkin pie with the pumpkin and Chad declared it the best pumpkin pie he's ever had.  I had a great talk with both farmers and they are really doing a great job bringing healthy, sustainable food to the market.

In addition to the vendors, we also had some great demonstrations.   Golda Simon of SNAC, who is also a long-time PCC Cooks cooking instructor, spend the day teaching people innovative recipes using seasonable herbs.  She is quite a lady- a cooking class with her is an opportunity not to be missed.

Seattle Tilth also had a composting demonstration- people helped feed the worms in our worm box at the farm.

We had a number of local community organizations attend, too.  The Rainier Beach Neighborhood Association was there advertising their new Neighborhood Academy- an informal series of classes for neighborhood residents on a variety of topics, from gardening to canning to jewelry making.

Cascadian Edible Landscapes was also present, sharing information about how to integrate edibles into lovely yards and landscapes.

Joan Engelmeyer of City Art Farm was on hand with creative, agrarian themed art activities for kids.  Many bean mosaic masterpieces were created, as well as a number of beautiful necklaces with leaf prints.  If you live in Columbia City and have kids, you should definitely check out Joan's business, it is fantastic.

Good friends Megan and Christian brought their chickens out to play for the day and to represent Seattle Urban Farm Co-Op, a community based farm supply for backyard farmers in Seattle.  The chickens were a huge hit with the kiddos.

The kids were also really enamoured with the goats.  Amazin' Grazers were onhand to showcase their amazing weed-eating abilities (a great alternative to pesticides!).

Soaring Hearts Farm of Snohomish County also brought Nubian dairy goats, which are legal as pets in the City of Seattle!  These lovely critters are gentle and sweet, and can help you with your dream of fresh goat milk and cheese from your very own backyard.

The middle of the day included an official program of speakers, including Mayor McGinn, city counsel members Richard Conlin and Sally Clark, Andrea Dwyer, Exec. Director of Seattle Tilth, and representatives from FACN and the Seattle Parks Board.  Everyone had really wonderful things to say about the future of urban agriculture, and the potential of the Rainier Beach Urban Farm to really strengthen the community in our neighborhood. 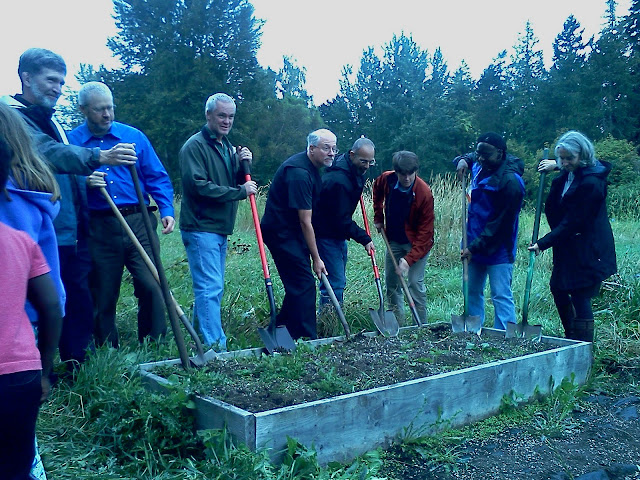 All of our speakers then headed over to our ceremonial veggie plot, where they dug their shovels in to celebrate the actual moment of ground-breaking.

After the formalities, we were treated to a tasty Mexican feast provided by Los Tinos, a local Rainier Valley business. 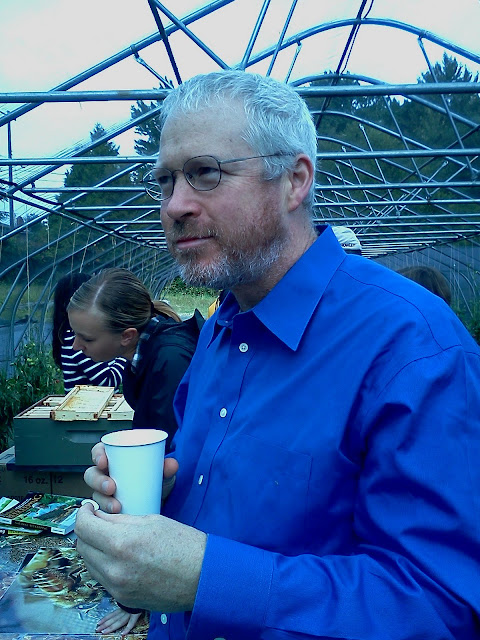 Mayor McGinn stuck around to tour the farm and talk with some of the community groups present.  In this shot he has just tasted some honey from the Puget Sound Beekeeper's Association.  He bought a pint of raspberry honey, as did I (good choice, Mayor!).

After lunch, we were treated to some funky grooves from The Frost Giants,


Throughout the day, we were visited by over 200 friends and neighbors, and pulled everything off without a hitch, thanks to the help of over 40 volunteers.  I was blown away by how well everything came together, and I'm really looking forward to future parties on the farm.