A Tale of Two Swarms

Last week I took advantage of a nice sunny evening to wander over to the bees and check up on them post split.  I saw this in one of the trees:


This swarm was right at arms length, so I donned my veil, grabbed a pair of pruners, and cut the branch off. 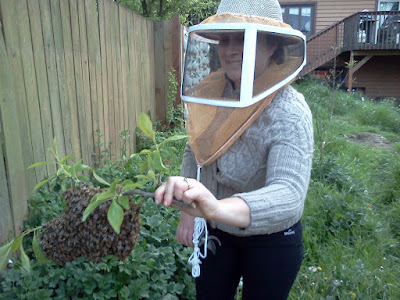 This was a little bit nerve-wracking. I've read that swarms are very docile, and I've seen photographs of people wearing bee beards during swarm season, but one never really knows the nature of the bees until one actually encounters the bees. Lucky for me, these bees behaved as expected- they didn't even notice when I clipped the branch they were clinging to.  I transferred them into a hastily-made temporary home, which consisted of two boxes, about 8 top bars, a temporary base, and a tupperware lid for the roof.

I wasn't sure where these bees came from. They possibly were from one of our hives, or from another hive in the neighborhood.  A swarm out of our hives seemed unlikely, since we had just done a split.  Then again, we were quite sure that Katniess Everqueen was alive and well in hive 2, but we had also seen swarm cells during our last inspection, so it is possible our girl Katniss grew restless and took off in search of other districts.

On Sunday, Chad and I were enjoying a relaxing day at home working on in the yard, when a gigantic crowd of bees suddenly took to the air and started flying around in circles.  I was worried at first that someone had poisoned the hive, or that an animal was attacking.  After a few minutes, though, the bees settled down into another swarm, in the same plum tree.


This swarm certainly came from Katniss Everqueen's hive.  As bees collected in the tree, others remained at the hive entrance and fanned their wings, spreading pheremone messages to alert absconding bees to the queen's arboreal locale.

Clipping this swarm out of our plum required a ladder this time, but the bees still remained incredibly docile. I   took one box away from the new swarm's hive, threw together another hasty temporary floor and tupperware roof, and dumped the cluster into hive #4.

I am almost certain now that the first swarm also came from Katniss Everqueen (and almost certainly included her).  Katniss most likely left behind a virgin queen, and took a pretty decent sized group of workers with her to get another hive established.  This other group is almost surely a secondary swarm, which means they have a virgin queen.  She will have to find some handsome drone to mate with if she wants to keep the party in her hive going.

It is pretty wild to realize that in a few short weeks, we have gone from one bee hive to four. Hives one and two seem to be doing very well.  Hive 1 is queenright and bringing in pollen like crazy.  They will likely need a new box in the next few weeks.  Hive two continues to bring in pollen as if they haven't lost their queen, which makes me think that they are now also queenright, or will be very shortly. Hive three, the new Katniss Everqueen, is already furiously at work building comb and has perhaps the strongest queen in our yard.    Hive 4's future, which depends on a successful union between the new queen and a drone, is still in question.  More to come soon.

In other garden news, we have been cultivating the largest chard plants I've ever encountered.  Planted last season, this chard continues to dominate our bed, oblivious to the fact that it was supposed to die over the winter. 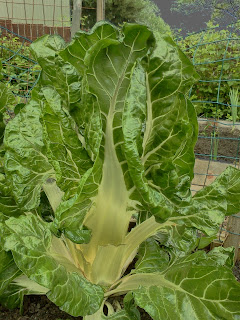 The stem on this particular leaf was a good 5" wide.  What?!  That's what happens to second season chard in a mild PNW winter! I chopped this up and added it to a delicious lentil-Swiss Chard risotto.  Yummo. 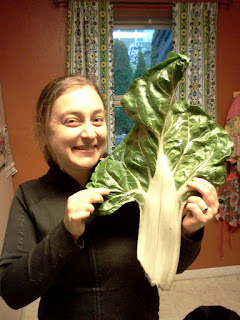 Other garden crops are off to a healthy start, too- brassicas, peas, onions, garlic, potatoes. It is magical, watching these little plants grow so much every day.  If you sit and observe quietly, you'll almost be able to witness this growth taking place. 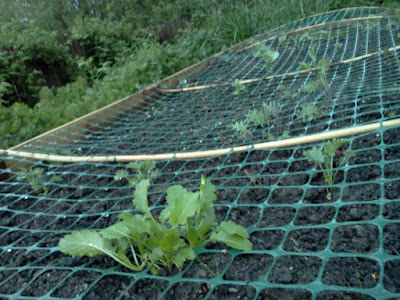 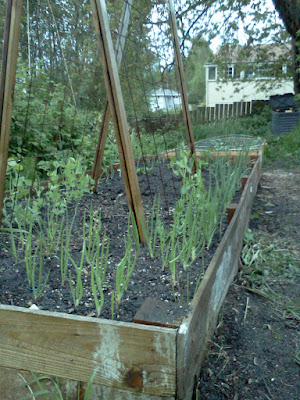