Revelations in the Dusk and Dawn (Spokane Round and Round, Part III)

I set out for my second lap just after 8pm on Saturday evening.  Although the sun had set, it wasn't yet dark- Spokane has an unusually long twilight period in May, and the light hangs in the air forever. Since part of the lap would be in total darkness, my lights were ready to go.  On my handlebars, I had an ultra bright MagicShine LED with a back-up blinky light.  To my helmet, I attached a headlamp with zip ties. A handlebar/ helmet combo is a great way to go- your helmet light illuminates the direction you are looking in, while the handlebar lights illuminate the direction the bike is headed in (sometimes these are not the same direction- for example, when going around a switchback). 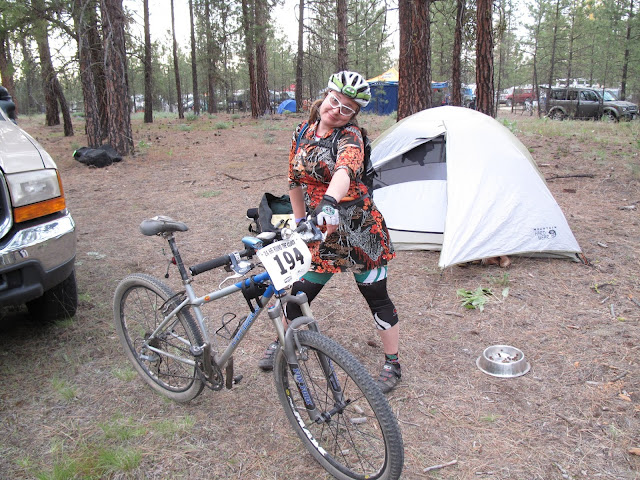 I also wanted to be in a more festive mood, so I rocked my forest elf dress.  It was actually a perfect piece of cycling attire- the arms came just below the elbows, so my forearms were free to breathe, and the poly fabric wicked moisture well so I didn't get too sweaty.  The extra layer gave me just a little added protection from the night chill, and I was comfortably cozy for the entire loop.

Racing through the singletrack in the waning light of the day's magic hour, I felt very peaceful, happy to be playing on my home trails.  As I came down Devil's Down and into Srawberry Fields, the last hint of orange disappeared behind the ridge, deep purples in the sky fading to dark blue.  When I reached Marakkesh Express, The Spokane River flowed deep and dark on my right, like a great black snake.  By the time I reached the paved section of trail, I was in complete darkness, my world contained in the cone of light emanating from my helmet and handlebars.  I focused only on what was immediately in front of me, watching ribbons of trail unfold from the darkness.

I bumped my way through Take A Little Piece of my Heart and Purple Haze, my flowy rhythm evaporating in the choppiness of those sections.  By the time I hit the fire roads at the end of the course, I was tired, ready to be done with this loop.  I pedaled as fast as I could for the last mile, but my visibility was limited by the dust floating in the air, catching in my headlight, making it difficult to see more than 10 feet ahead.

I came around the last corner onto the home stretch, which ran next to all of the campsites, and found a burst of energy in the enchanted scene that greeted me. In the hour I'd been riding, the stretch had been transformed into an array of glowing neon and twinkly light strings.  Riding through, I felt as though I had been transported from a bike race to Burning Man.  It was amazing.

I found Jill at the finish, all bundled up for her night ride.  I had a look at my time- only about 6 minutes off my first lap pace. Not bad, considering the dark!  I headed back to camp to wake Chad up for his lap, but found he was already awake, resting quietly with the dogs in the bed of the truck.  I helped him get all set up for his night ride- we traded the headlamp from my helmet to his, and set up his lights.  I gave him my clear glasses. He gave me a kiss and headed off to wait for Jill as I settled into my sleeping bag to relax and get some sleep.  It was around 10:30pm. With 30 miles on my legs,  and no sleep since 5 am that morning, my body was ready for bed. My mind however, still caffeinated on Gu, wouldn't shut down.  It kept racing, exploring topics completely unrelated to bicycling, unable to quiet itself. I drifted from thought to thought, but didn't succeed in sleeping.

Much sooner than I expected, Chad was calling softly through the window, done with his lap. He settled down into his bag and we chatted quietly about his lap.  This had been his first night riding experience and he was in love.  He found that the narrow vision offered by the lights really helped him to focus, especially on the climbs, and he swore he rode faster at night than in the daytime.  We chatted for a bit more, then he drifted off to sleep. I still couldn't get my mind to quiet down, so I got up and prepared for my third lap.  I wore my warmest wool clothes and put on my down jacket - it had gotten considerably colder and I was feeling a little chilled.

I headed to the start line to wait for Tyler at about 3am.  I was starting to get really tired, as I hadn't slept in about 23 hours.  I thought about having some more Gu- the sugars and caffeine would make this lap much easier, but it would be nearly impossible for me to sleep afterwards, so I opted to skip it.

At 3:30 am, Tyler came in, held up briefly by a flat tire, which he changed in the dark with no major problems.  I headed out, almost immediately regretting my decision to forego the caffeine.  The first climb, though short, seemed more difficult than before, and my brain felt so fuzzy and tired. I stopped to fix my heart rate strap, which was slipping, showing a heart rate of zero. I lingered for a few minutes trying to talk myself into wakefulness.

As I entered the singletrack, I had to keep shaking my head, trying to clear the fuzz- the trees just seemed to be coming so much faster than they had in the daylight.  As I approached checkpoint 1, where Leslie and Erin were volunteering, I perked up- I knew they had coffee and I wanted just a little sip. Coffee, coffee, coffee... my brain focused on this mantra. When I arrived at the checkpoint,the volunteers were unfamiliar- Leslie and Erin weren't there yet.  Dissappointed, I pedaled on.  I tried to be kind to myself, giving permission to go slowly. It would be okay, I decided, if this lap took 2 hours or longer.  The important thing would be to finish, no matter how long it took.

As I approached Devil's Down, I debated whether I should ride it. It was dark, and given how tired I was, I wasn't sure I should attempt it.  I had all but talked myself out of riding it, but at the last minute, I changed my mind.  I didn't want to succomb to my doubts, even with a tired mind.  I went a little more slowly than in the daylight, but I conquered it without incident.  I let the brakes loose at the bottom, gathering speed and letting a loud "whoo!" loose into the night.  I was completely overcome with euphoria.  I started crying with happiness as I rode across Strawberry Fields Forever, laughing as the tears came. I'd had emotional experiences on the bike before, but they generally consisted of me blowing up on a climb, near the point of exhaustion,  breaking down out of frustration. This was completely different- this was un-containable happiness.

As I pedaled, early dawn broke and daylight streaked across Strawberry Fields.  My high continued as I reflected on the symbolic bookending of my night.  My last lap had started in daylight and descended into darkness. This loop started in darkness and mental fogginess, but I was now ascending into the dawn,riding a wave of euphoria. As I picked my way through Purple Haze, I thought about what an appropriate name this was for a lap at this hour, as I was practically hallucinating on a mix of hazy exhaustion and early morning adrenalin.  I glanced down at my clock, and was astounded to see that I had only been on my bike for an hour and fifteen minutes. I was sure I was going to have at least a 2 hour lap.  Maybe I had forgotten about another section of course ahead of me.... but no, sure enough, I finished the final climb at about 1:21.  I laughed out loud and started happy-crying again as I realized that I was going to come in under 1:30.  This seemed Extremely Profound and Monumental to my addled brain.

I crossed the finish line at 1:24- only 6 minutes slower than last lap. A fucking miracle, given my brain fuzz.  I rode back to camp, smiling, and feel immediately into a deep sleep.  It was not quite 5am.