This past Saturday morning I hopped on my bike and rolled down the hill to welcome Mayor McGinn as he toured the Atlantic City Nursery, a property in Rainier Beach formerly operated by Seattle Parks and Recreation. For the past few months I've been working with a group of friends, neighbors and urban agriculture advocates, called Friends of the Atlantic City Nursery (FACN), to advocate for turning the site into a working urban farm, following a model based loosely on Will Allen's work with Growing Power. 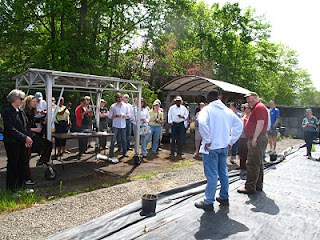 The mayor's visit was a significant step in a planning process that started last year, when Seattle Parks declared that they would no longer be using the nursery and issued a call to the public for ideas on future uses for the site. Since hearing this announcement less than a year ago, FACN has organized neighbors and leveraged funding sources, done extensive outreach and led a successful community visioning meeting in March. (I should mention that my involvement has been pretty minimal until this point- I've really only helped orchestrate community events, I can't take any credit for the work happening behind the scenes or for shaping the broader vision)!


While the public process is ongoing, and no formal approval for the project has been given, I couldn't help but take Mayor McGinn's visit as a good sign for the project, especially since he has recently declared 2010 the Year of Urban Agriculture for the City of Seattle.

Mayor McGinn showed up right on time for the tour, a stop along a greater tour of Rainier Beach related to our upcoming Neighborhood Plan update.  He brought along a cadre of city staff and officials, including Deputy Mayor Darrell Smith, and representatives from Seattle Parks and Rec, the Seattle Department of Neighborhoods, and Seattle DPD.  The turnout was fantastic.  Here are the two co-chairs of FACN, Peter Masundire and Harry Hoffman, explaining the group's vision to the Mayor and his staff (Peter and Harry are on the right): 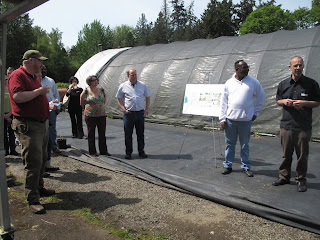 Although supporters for the project made up the majority of attendees, it soon became clear that not everyone was there to show support. A small number of rather vocal neighbors were adamantly opposed to the project on the grounds that it will compromise neighborhood security.

Mayor McGinn didn't shy away from the controversy at all, but listened  intently to neighbors' fears and deftly handled their questions.  As people relayed their horror stories related to home burglary, unpleasant encounters while walking in the adjacent wetlands space, and fears about more crime, it became apparent that security has been an issue for a long time, and residents are frustrated with the City's lack of action, from their perspective, on this issue.

While I empathize with these neighbors,  I don't share their fears that a new use of this currently vacant space will create additional security concerns for them.  In fact, lots of great urban space thinkers, including one of my personal heroes, Jane Jacobs, argue that the key to safe public spaces is liveliness- the presence of people people engaged in activities throughout the day,  providing informal community policing- the notion of adequate "eyes on the street."  Indeed, this Guide to Making Parks Safer, published by the Partnership for Parks, emphasizes the importance of regular activity to activate public spaces- you must drive out bad activity with good activity.

An urban farming project would plentiful good activity to the Atlantic City Nursery site- I'm envisioning regular farm tasks during the work day by a farm crew, as well as school field trips, workshops in the evenings and on weekends, perhaps a farmer's market one day a week,  and maybe some other evening events such as theater performances, live music, etc.   Such uses would encourage healthy community, and discourage activities in the community that are less desirable and dangerous.

Here are some pics of the space, in its current vacant state....  can you imagine it as a functional, vibrant farm?  What an incredible opportunity! 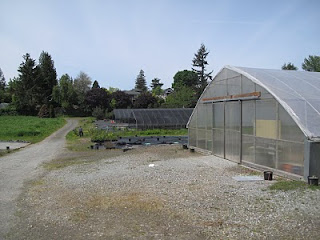 one of the existing greenhouses 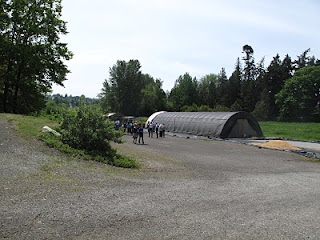 view of the site, looking south 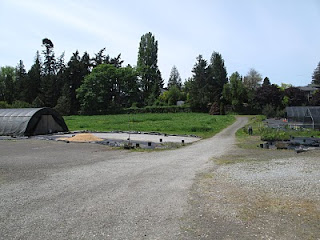 Great review and commentary on the event. I appreciate your mention of Jane Jacobs, establishing hybrid space, the "fear" of change as a driver of the outbursts and vocal statements of not being included....all signs that people historically isolated in a very diverse zip code are not really familiar with what an urban farm can do and does do with an empty space. I suggest they bring in Sue McGowan from Marra Farm to talk about her challenges and successes. This is a leap for Seattle and not many people know about Will Allen and Growing Power as a successful model. A demonstration would be helpful.