Last night was the annual Bike Works auction. Bike Works, based in Columbia City, educates and empowers youth through teaching them about bikes (riding and fixing!).  They offer a wide array of adult programming too- from drop in Volunteer Repair Parties (VRP) every Thursday, where you can improve your bike mechanic skills while drinking beer and conspiring with other bike addicts, to more formal bicycle repair classes (including the ABC and DEF series), as well as some fun social bike events.  I've been a regular VRP volunteer for just over a year, and I've also assisted Bike Works staff with teaching both the ABC and DEF bike repair classes.  Last year I volunteered at the annual Bike Works auction, and I had such a blast that I volunteered to be on this year's auction committee.

The theme of this year's event was "People Powered," and the venue, Herban Feast's SODO Park, was decorated with a comic book superhero theme. "People powered" also describes the manner in which this event was pulled together.... a mighty army of Bike Works staffers, board members and volunteers put lots of time and love into making the evening fabulous.  Here are some shots of the space, and a little taste of the decor:
Somehow the auction theme and colors matched perfectly with the Seattle Sugarplum elves' newest costumes, Elf Superheros!

The elves were enlisted to help Laura, the amazing auctioneer, keep track of auction bids and encourage bidders to bid higher.  Two elf misters accompanied us... my dear hubby and also Mr. Stripes, aka Christian, who was a champ on crutches!

This was my second year "auction spotting" and it was a total gas.  I got to spend the evening encouraging wealthy attendees to spend money supporting Bike Works while also helping them score some amazing auction packages.  I honestly can't think of a sales position I'm more suited to!  Some of the live auction items really appealed to my inner farm girl... there was a custom chicken coop (including a chicken consulting from my homies at Seattle Urban Farm Company!); a huge food lover's cornucopia which included organic meat, a Columbia City breadshare and a Nash's organic produce subscription; and a swanky tour of the new Wild Horse Wind Farm east of the mountains complete with a posh stay at Suncadia.  I also dreamed about bidding on Goldmyer Hot Springs backcountry pampering package, which included lessons in backcountry cooking, storytelling, and poetry.  Ahhh.  What a fabulous trip that would be.  Calamity Elf won naming rights to one of the bicycles in the Bike Works touring fleet. In addition to the privilege of naming a bike, she will also receive a postcard each time a Bike Works youth member takes the bike out on a bike tour!  How amazing is that?!  (BTW she's looking for suggestions for the bike's names, so if you have ideas, leave them in the comment section below and I'll pass them along).

The silent auction also had a dazzling showcase of bicycle themed items.  I got to know the items quite well, as my auction committee role was "auction display lead."  This meant that I  had to come up with creative ways to display everything and think of some images/ symbols for items which were not themselves tangible.  For example, I used some plastic sea creatures in a little bowl to represent board member Bill Lippe's cioppino feast. To represent the chicken coop, I bought some yellow peeps and smooshed them on top of the literature abut the chicken coop designers.  I was also in charge of making the Buy it Now Board - a wall where you could buy gift certificates to restaurants and shops as well as tickets to theater performances and other shows, with all proceeds going to Bike Works. 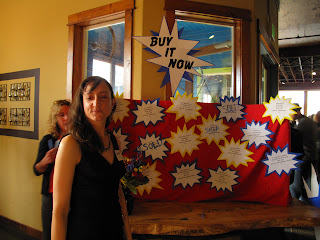 Chad cut out thirty "kapow!"s and glued them together- a task which took most of his day on Saturday.  He was such a helpful, crafty husband, and there is no way this would have been done without him!


My favorite silent auction item may have been this amazing doorbell: 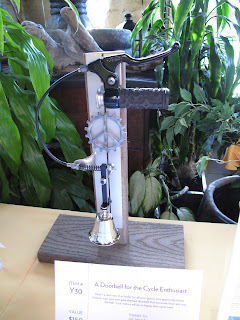 You squeeze the brake lever, which moves a cable actuated spring which causes the bell to move back and forth and ring.  Rad!!!! I bid on this but it went way above my budget, sadly.  Maybe I'll have to make my own brake lever doorbell!

Of course, there were also some great bikes to bid on.  Here is a photo of a Redline 9to5, a vintage Raleigh with a new Bike Works custom build, both displayed on a beautiful hand made wooden bike rack: 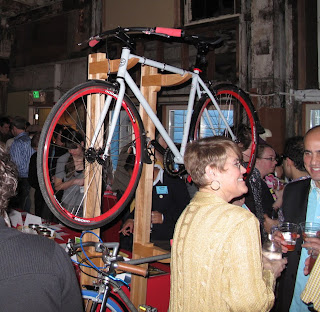 It was so much fun mingling with volunteers and auction guests while contemplating bids for select items. Among those I bumped into- the amazing Tupper family!  Such fun people! 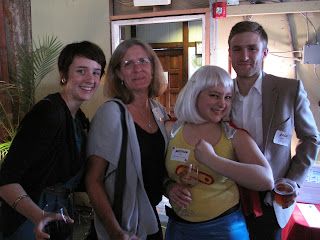 Here I am doing my best muscle flex and trying to show off my "wrenchy" emblem.  There were lots of other notable guests at the auction too, including Seattle City Council members Richard Conlin and Sally Clark, bicycle attorney John Duggan, and environmental attorney and advocate Peter Goldman, founder of the Washington Forest Law Center and regular bike commuter.  The elves had a grand time too, drinking plenty of elf tonic..... 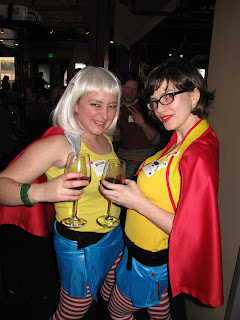 The undisputed highlight of the evening, though, were the kids who participate in Bike Works programs.  Some of the Bike Works youth shared their thoughts on how they've benefited from the programs.  Here's a few of my favorite clips: