On Pedals and Petals

Lately I've been spending a lot of time in the garden, which has led me to dream up all kinds of gardening-related topics to write about. Every spring I get overtaken by this huge urge to get out in the dirt, pull some weeds, plant some seeds, and celebrate growth in my backyard. My sense of urgency to get my hands dirty is driven by the first emergence of the sunshine, the long daylight hours and by a deep desire to get seeds planted so I can enjoy the fruits of my labor during the lazy days of summer. These past two years I've struggled with how to balance my love of gardening with my love of riding bikes... especially during the springtime, when both pursuits require a high level of commitment in terms of time and money. Anyhow, as I continue to struggle with balancing these pastimes, I'm planning to chronicle my adventures in both cycling and gardening here.

I've been thinking about the similarities between riding bikes and gardening ever since asked this question by my friend Muuqi, as a part of an interview he did awhile back for his blog, Life Cycles (great blog, check it out!). Basically, it comes down to two main themes-  observation and investment.   Both acts- riding bikes and gardening- give you an opportunity to have a more intimate interaction with your natural surroundings than say, sitting on the couch or driving in a car.  These interactions help you develop keen observation skills, which I think makes you a better citizen of the world, or at least a more interesting person.  On investment- there is immediate satisfaction, from weeding a plot of land or building a trellis, or from sweeping around a perfect corner on a mountain bike, or reaching the top of a tough climb. There are also longer term rewards.  In the garden, you pick ripe fruit,  cut fresh greens, you savor the literal fruits of your labors.  Similarly, on the bike, you harvest a sense of growing strength and speed after investing in repeated workouts on the bike.


This past weekend was a great balance of good work in the garden and a memorable bike ride. We spent Saturday repairing our deck, which was falling off our house due to a rotten footing and had reached a critical safety point.  Sunday morning we woke up bright and early to finish an ongoing raised bed project, complete with fences to keep the dogs from eating compost/ trampling new seedlings. 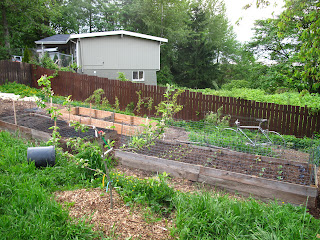 One bed is full of brassicas- cabbage, broccoli and kale, as well as some garlic and onions.  The other is planted with a lot of lettuce and arugula, more onions (green onions and leeks, in addition to some Walla Walla sweets), carrots and radishes. The third bed in the back, made of the newer cedar, will be covered in a cloche, or a kind of hoop system with a plastic tarp over the hoops, which will hold in the heat and create a warmer growing environment for warmer weather crops- tomatoes, basil, squash, melons, peppers, and eggplant.  I can't wait to get this bed planted!

In the right hand corner, you can see our pea patch, which has a very special trellis... 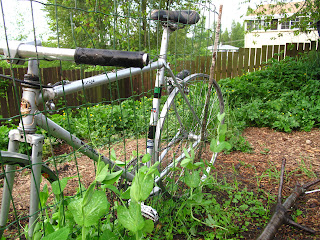 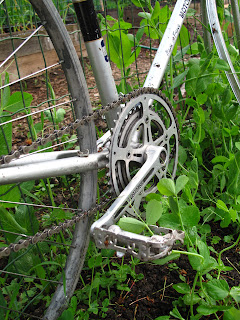 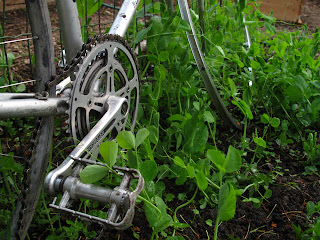 This bicycle trellis is made out of my old Motobecane, a single speed commuter which was my daily transport when I lived in Oakland/ Berkeley/ San Francisco.  I used it to get to UW when I lived in Ballard, but since moving to Rainier Beach I've surrendered to the hills, and generally commute on my road bike, Indya. I haven't ridden the Motobecane in a very long time, and she's really at the end of her life as a reliable ride- she has an obsolete French bottom bracket with questionable quality of threading left, and the headtube is ovalized.  It was ovalized when I built her, actually- there is a pop-can-shim in the headtube which is keeping the fork in place, which worked but was probably less than a perfectly safe arrangement.  Given her state I don't feel right selling her, plus I have a lot of sentimental attachment to this bike.  Anyhow, putting her out to pasture, literallly, as a garden trellis, seemed to be a good fit for her.The peas appear to be quite happy having a nice, sturdy, steel trellis to climb up also.

In addition to the raised beds, we also started a potato box. 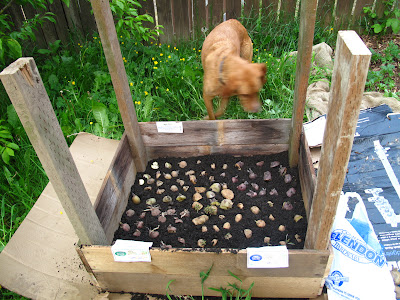 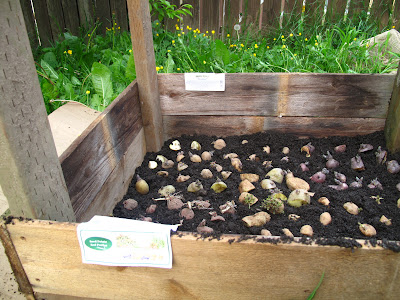 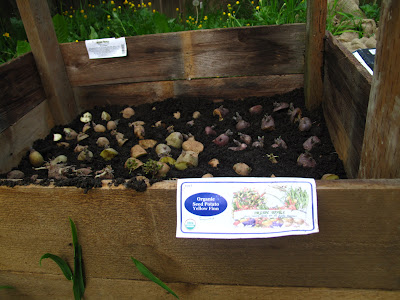 The potato box is an experiment in high-density potato growing.  I've read that this method can yield upwards of 50 pounds of potatoes in a single growing season, not bad for such a small space.  Space is actually the biggest reason I've avoided growing poatoes until now- the traditional method of building raised rows and filling them in over the course of the summer works great if you have a lot of land, but is less than ideal for backyard gardening.

Anyhow, this technique calls for covering all of the seed potatoes with a small amount of dirt, then adding more dirt over the course of the season as leaves emerge from the previous layer of dirt.  I'm a bit skeptical about the yields promised by potato box evangelicals out there, but I'm willing to try it!

I also planted a little patch of flowers which are particularly beneficial for bees.... 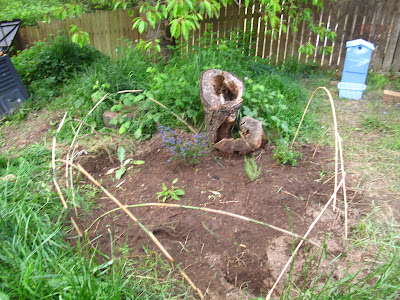 This bed includes two varieties of ceanothus, or California Lilac; a French Lavender plant; an echinacea; and two artichokes (one of which was almost immediately eaten by Chase, at which point I added a little bamboo fence to give these plants a tiny bit of protection).  I replanted the nearly-eaten plant, which probably won't make it- and although this fence won't provide a ton of protection from digging, it will at least keep the dogs from running through this area and trampling the plants.

I'm focusing on plants which are beneficial to bees because..... we got honey bees! Two hives' worth!  I'll write more soon about the bee experience so far, but for now here's a sneak peak-


After all this work, Chad and I needed a bicycle break.  We headed out to Tolt McDonald with my friend and teammate Jill to get a little muddy on some mtb trails.  We spent just a couple hours up there whizzing around the singletrack, working on skills, getting a bit of exercise on the climbs, and running the dogs, but it was such a breath of fresh air for me.  As much as I love riding my bike around the city, there is something so invigorating about getting out and pedaling through a forest, feeling the rhythm of the singletrack and encountering the stillness that seldom exists within city limits.  I'm talking about the dream-about-it, smile-about-it-three-days-later, want-to-reinvent-your-life-for-it, similar-to-falling-in-love kind of invigoration.  Those few hours under the trees on the trails gave me a much needed change of perspective and made everything in life seem new and fresh again.  Mountain biking always seems to have that effect on me.

I also love that the dogs get to come mountain biking with us.  I love to see them running around the trails, enjoying the sniffs and sounds, getting a taste of a wilder life than the normal day-to-day routine allows. This ride was also notable in that it was Chase's first mountain bike ride.  He did great- he had tons of energy, kept up just fine, and listened pretty well.  He and Lexi both slept well that night. 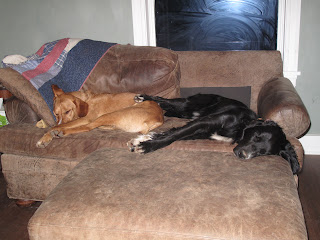 Worn out doggies, dirt on the tires, and newly seeded plants.... life doesn't get much better than that.  Really an ideal weekend.

I love it Megs! Good work on your garden (and biking)!