With all bee preparations done, the weather holding (no rain nor wind), the moment to install the bees arrived and we got to work. 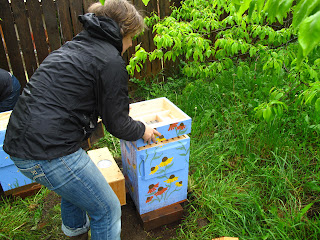 I removed the "quilt," the insulatory part of the hive.  This box has space in the middle for a feeder, and a piece of fabric stapled to the bottom of it.  It would later be filled with wood shavings, around the edges of the feeder, to provide insulation and moisture management for the hive. 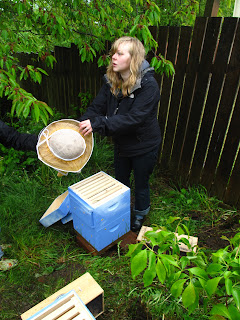 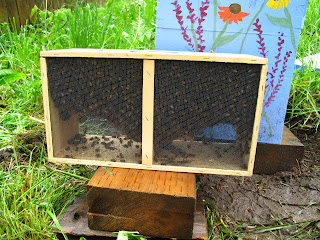 The bees patiently awaited their move to a new home. 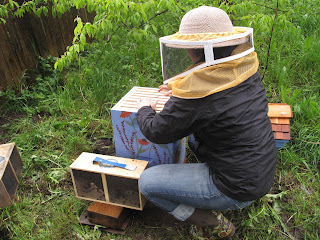 I slid the top bars around to make room to hang the queen cage. 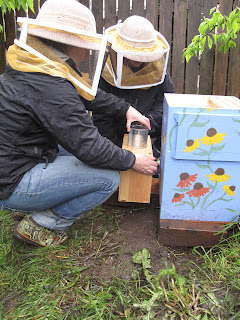 I pulled out the feeder, realizing quickly that this meant the bees were on their way out too! 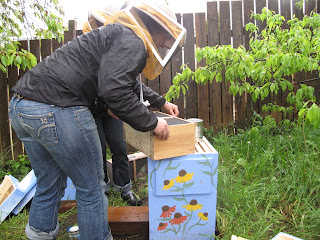 Phew!   I got nervous, but took a deep breath and focused on keeping calm, moving quickly but smoothly, trying to find the best way possible to transfer these bees without exciting them too much. 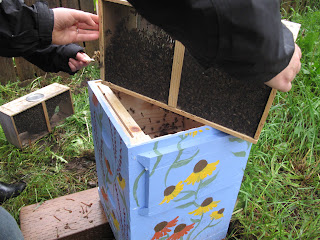 I poured some bees into the hive... oops!  Almost forgot about the queen.  Here's her little cage 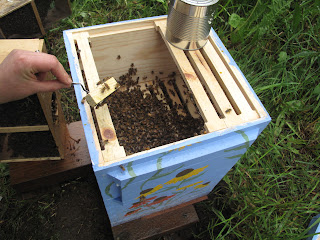 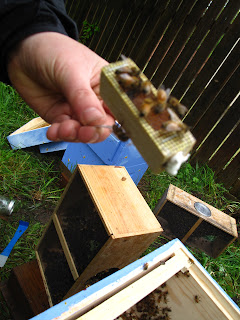 Here's a closeup of the Queen cage (sorry it is blurry).  Her attendants are there at the top, making sure she is fed and doing well.  You can see where we stuffed a piece of marshmallow in the end, replacing the wooden cork the queen cave arrived with.  The bees will eat through the marshmallow candy and release the queen.

After pulling the cork and replacing it with marshmallow, we secured the queen box to one of the top bars.  We were, at this point, also supposed to check to see if the queen is alive, but there were bees crawling all over the queen cage and I chickened out, securing the queen cage in a hurry and hoping that her attendants leave my fingers alone just a few seconds longer.  I guess we'll have to figure out later of the queen is alive. 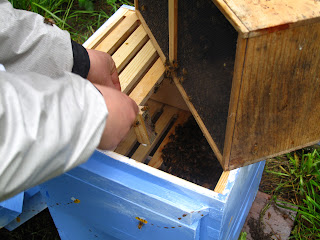 We poured more bees in to the hive.  It was quite incredible and also overwhelming to see so many bees all in one place.  They were not acting particularly fierce, but they were disoriented and agitated. It is easy to see how getting on the wrong side of an entire hive would have a bad ending, especially if you happen to be allergic to honeybees.  It is also astounding, though, how they know intuitively to keep together.  It is almost as though they are separate buzzing parts of one large organism rather than individual beings. 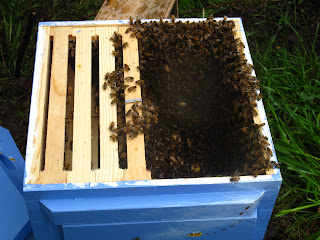 We replaced the top bars, on the hive.....  forgetting that there are still more bees to reunite with their bee sisters. 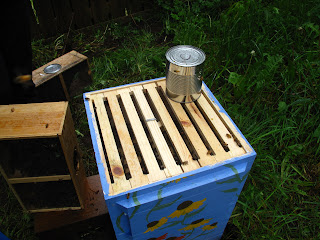 I tipped over the box- and  attempted to shake the bees out.  I shook gently, timidly, not wanting to hurt them.  The bees clung stubbornly to the sides of the package box, not tumbling out the way they did for the guy on the youtube video I watched in preparation. 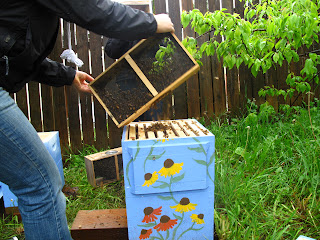 I shook a bit harder, then stopped to readjust my grip on the box.  The exploded into busy bomb scene of angry bees- total bee mayhem.  Disoriented bees flew through the air, trying to figure out where their queen has gone and buzzing angrily at me.  I realized I hadn't attached my veil to my helmet correctly when I saw three bees crawling up the veil, on the inside.  I stopped, stepped away, gingerly peeled my helmet and veil off, and asked for some help from Chad  and Venessa to brush off the handful of bees finding their way up into my veil. Note to self- beekeeping is an activity best done in groups of two or more.  Miracously, I had no stings, save for one little renegade bee on my thigh who decided that I was a predator and that my presence merited sacrificing her life to attack me.  I watched her back up and start to stick her stinger through my jeans, but I brushed her off quickly, feeling just a tiny poke.  No stinger left behind.... maybe that little fierce bee lived to fly another day? 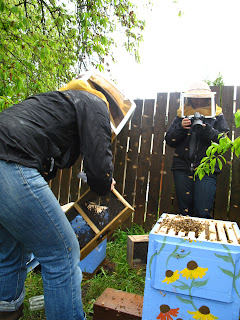 I returned for a few more shakes, then left the bee box propped up next to the hive so that the last few stragglers can make their way back to the nest. 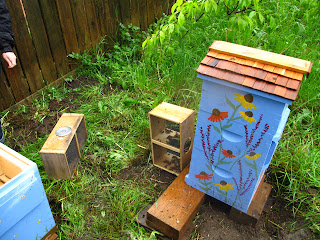 Phew.  Really intense, but really amazing too.  Venessa posted a great video of it all coming together.
Posted by Megbikes at 5:39 PM

This is really awesome! I went to a car show this weekend and there was a bright yellow car that got completely covered in bees. I mean you couldn't even see the car. I guess a queen bee had found her way into the car. Bee people had to come and figure out how to get the queen out. Really interesting and fascinating stuff! I bet you have a beautiful garden this year!

Wow, what a crazy story about the yellow car. That makes sense- bees are attracted to yellow, and it is swarming season (when hives get overcrowded and some/ all of the hive "swarms," looking for a new place to live). They must have thought the car would be a good hive! Craziness. I would have loved to have seen it. Anyhow thanks for your comment Kelsie! Hope things are going wonderfully for you!