So, despite the fact that my last blog post was about the bee install, in real time, our busy bee ladies have now been in place for nearly four weeks.  In that short amount of time, each hive has built 8-9 lovely white combs. 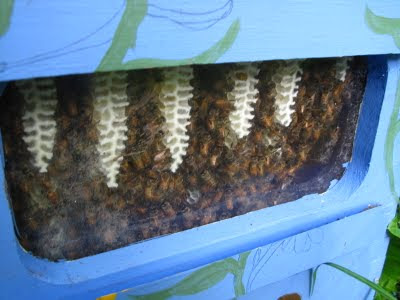 Bees are coming in and out, gathering nectar and pollen.  Here's a video of the take off/ landing strip at the front of the hive one evening a few days ago:

Inside the hive, worker bees have been tending to the comb.  Here's some footage from the hive window- there are lots of bees doing the "bee dance," which is their method of communicating distance and direction of nectar and pollen sources. You can see one bee on the lower left hand part of the screen doing her bee dance over and over again.

Other worker bees are busy filling each cell with pollen, which will be consumed by bee larvae after they hatch.  I haven't been able to see the queen yet, but the fact that workers are bringing in pollen is generally taken as a sign that the queen is in there, laying eggs. Here's a video of a worker bee depositing some pollen into one of the cells (look for the bright orange pollen, in the middle, to figure out which bee it is):

Anyhow, as you can see, I'm enamored with these bees. I find their bee life so intricate and fascinating.

In closing, a bit of bee humor for you (courtesy of co-keepers Joe and Venessa, via Abstruse Goose): Has it really been four weeks!? That's crazy! I miss the bees...I'll have to come down when we get back from the peninsula this week. Keep up the good work girls!