We recently headed to the Methow to celebrate our friends' Morgan and Casey's wedding at Spring Creek Ranch, the same amazing venue where Chad and I got hitched. We rolled into town early Saturday morning and set up camp at Buck Lake Campground, a beautiful quiet spot about 14 miles northeast of Winthrop. 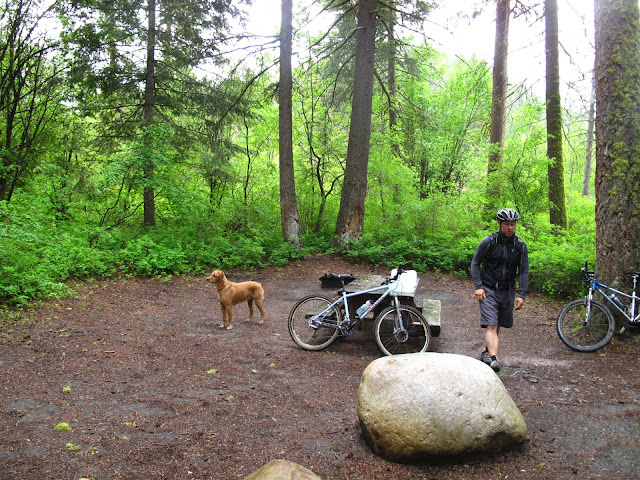 After the tent was assembled and air mattresses/ sleeping bags rolled out, we still had a few hours before the wedding.  We set off to explore Buck Mountain Loop, one of the more famed Methow Valley mountain bike rides in the area, heading out along a forest service road which followed the edge of Buck Lake.

Chad did a quick stop here to stash some beers in the lake, with the hopes that they would be cold upon our return. 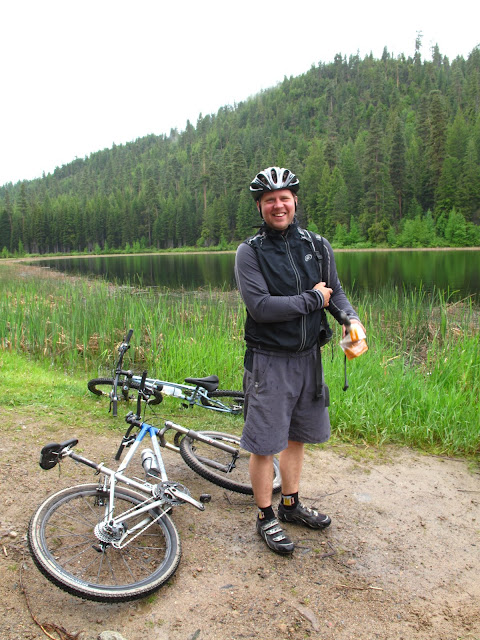 It was a drizzly, misty day but plenty warm for riding.  We followed the forest service road for about a mile, then, on a hunch, took a right on a trail snaking to the left away from the fire road.  It looked, on the map, as though this trail connected to the actual Buck Mountain Loop.

We pedaled through open forest with some low scrubby brushes for about a half mile, then popped out on another singletrack, hitting the Buck Mountain Loop.  We pedaled along for another few hundred feet and the woods broke into a meadow full of blooming Arrowleaf Balsamroot. 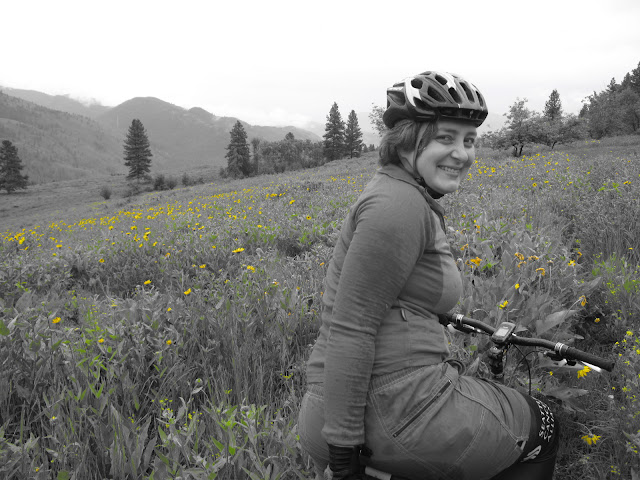 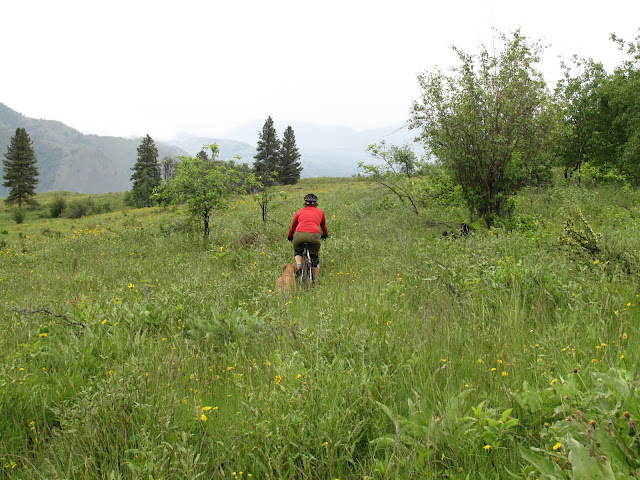 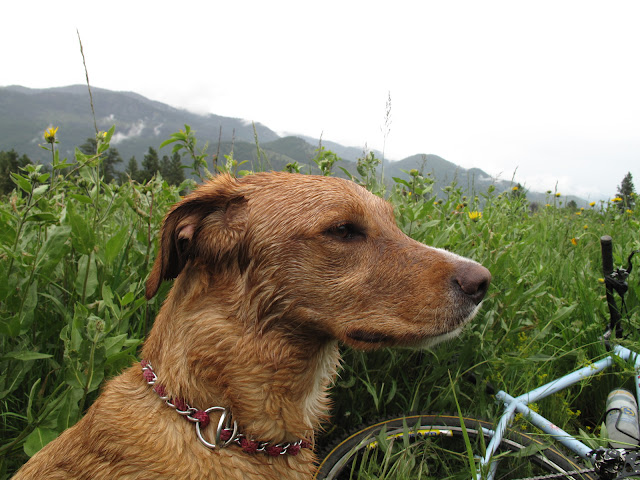 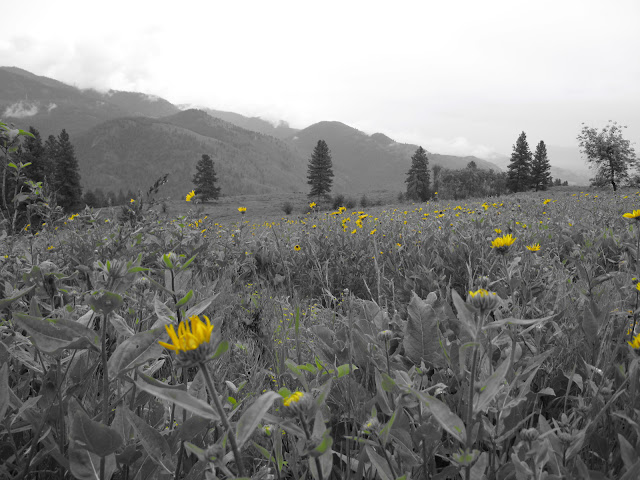 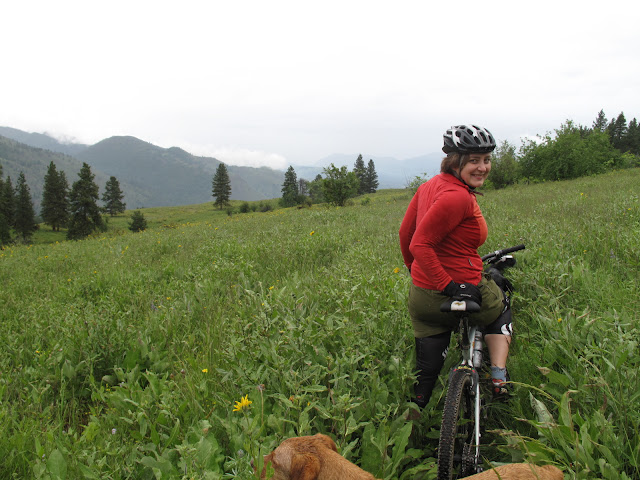 The trail was really narrow but incredibly smooth- you didn't need to see your tires to know where to point them. 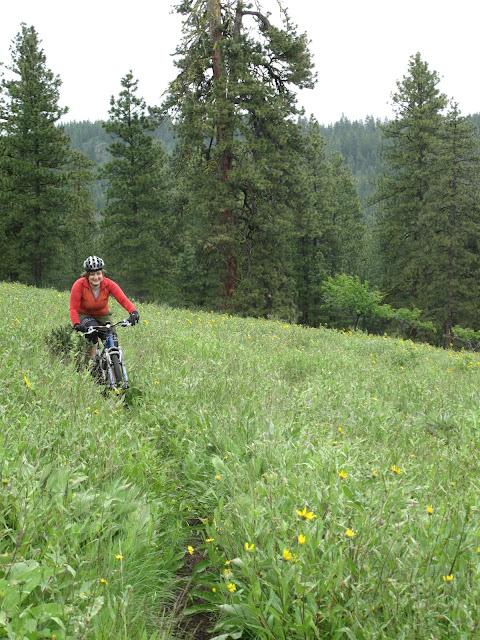 We rolled on through the field until the single track connected to another fire road, which appeared to have had a lot of use.  We turned right (to the northeast) and ran up a steep section of the road.  We were now on top of a sort of plateau, with trails weaving every which way.  We chose one that veered off to the right, and kept pedaling along.

We came around a corner to see a rather large coyote, about one hundred feet ahead.  We  yelled at the dogs to stay, but Chase, in a predictable  display of his name, took off to go check out this new "dog."  The coyote puffed herself up, bared her teeth and tried to stand her ground, but Chase, undeterred, galumphed right up into her face, trying to sniff noses with her.  She growled and moved toward him, but then thought the better of it and took off through the woods, Chase right behind her.  We yelled and screamed, even blew a whistle, but to no avail- Chase was in Chase Mode and the two of them disappeared up over the ridge.  Chad and I exchanged worried looks- we'd both heard stories of dogs being lured by coyotes off into the woods, and attacked by the pack.  To be fair, this coyote didn't seem to be attempting to lure Chase off- rather, it was us who was encroaching on her territory.  That being said, we didn't want to deal with any injuries that might arise from Chase picking a fight with this coyote.

We threw our bikes down and took off running up the ridge, Lexi sticking close by and whining.  After about 2 frantic minutes of us calling to Chase at the top of our lungs and blowing on that damn whistle, he finally came back to us, tongue lolling, coyote no where in sight.  Phew.  We took breaths of relief and walked back down the hill to retrieve our bikes, both of us relieved that Chase had returned unharmed.

Back in our saddles, we continued along the fire road, around a corner bending to the right and moving further down the draw.  Approaching rapidly on our right we saw the same coyote coming at us, yipping and snapping, tail puffed.  "NO!  NO!"  We yelled at the coyote, to deter her from coming any closer, and told the dogs to stay, which they did, thankfully.  The coyote continued to charge, then abruptly halted, retreated, puffed up, and howled- three or four very distraught, angry howls. "Shit!" said Chad. "She's calling the pack in!  Let's get out of here!"  " I don't think you're supposed to run away from wildlife...."  I murmured, but he was gone, off at a dead sprint about 100 yards ahead of me, both dogs running furiously and panting in effort to keep up with him.

I watched the coyote for a minute, then took off at a normal pace, not wanting to give her anything to chase after or attack. She followed along behind me for about 1/4 of a mile, then turned away and trotted off.

As I pedaled away, heart pounding, it occurred to me that the coyote probably had kits nearby and was acting defensively on their behalf.  I rode up to Chad and teased him for leaving his wife behind as coyote bait.  We enjoyed the rest of the ride, although we made sure to keep a healthy distance between us and the spot where we had seen the coyote.

When we got back to the lake, the beers were cold, and they tasted great as we drank them in the rain.  A bit of the arrowleaf balsamroot followed me home, a lovely reminder of a fun adventure. 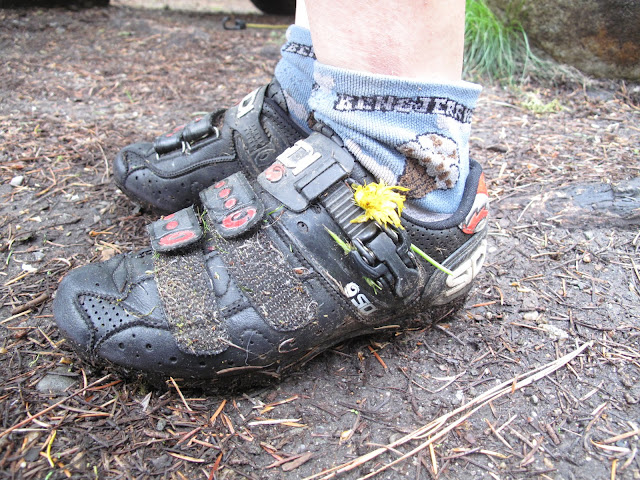 We cleaned up and loaded the dogs in the car for a nice long nap while we partied at the wedding.  Our two mutts were truly exhausted. 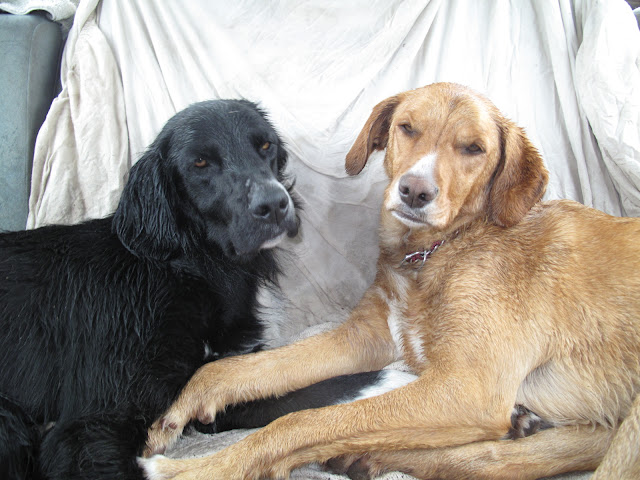 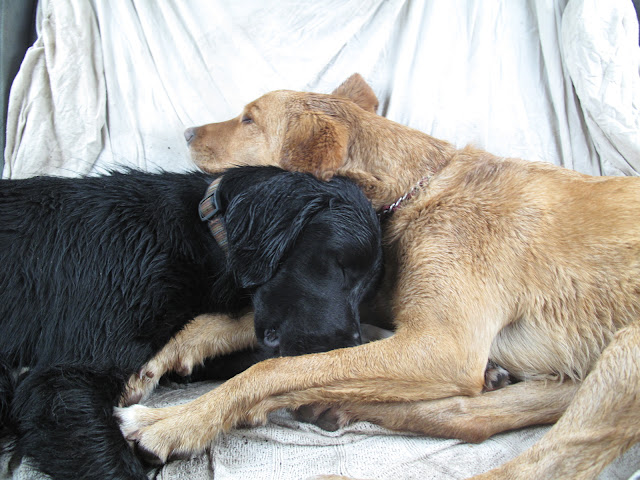 While they napped, we celebrated way into the night at Morgan and Casey's wedding.  Thanks, guys, for including us in such a lovely celebration!  It was wonderful to be back at Spring Creek Ranch.


Postnote:  I did a bit of research when I got home and discovered that, indeed, the charging/ retreating activity is pretty typical of alpha female coyotes with kits nearby.  For more info on coyote behavior, check out the Coyote  Yipps blog.