A few weeks ago I took a last minute trip East to embark on a mountain bike adventure with my dad- an organized mountain bike Gran Fondo, or "great distance" ride.  A celebrated ride format in Europe, the Gran Fondo is just catching on over here across the pond.  This particular Gran Fondo, organized by Bicycle Sales and Service , a North Idaho bike shop, offered a number of distance options- 10 miles, 17, miles, 35 and 50- to explore the trails at 4th of July Pass, just east of Coeur d' Alene.   Dad had called me a week prior to ask if I was interested.  I said maybe, let him know I'd get back to him, but he called three days later to let me know he had signed us both up for the 35 mile option.  I had no choice but to hoof it over the mountains to join him, or face serious shaming.

Chad and I left Seattle at about 7:30 on Friday night, putting us in to Spokane about midnight.  A night cap with buddies resulted in my staying up until about 1:30 am, leaving just four hours of sleep before dragging myself out of bed time to make it out to my dad's and meet him before the start of the race.  Eesh. I'm definitely getting too old to do long endurance rides on that short of sleep.

We rolled into the parking lot at the top of Fourth of July Pass at about 8:15 am, which gave us plenty of time to register, eat and stretch before the official start of the ride.

We took off for our first lap, a 10 mile warm up loop to the south of I-90, with some up and down rollers but nothing too crazy.  There were about 25 other riders opting for this distance and we left the start together then settled into our own pace.  I was amazed at the diversity- a rage of ages and lots of women represented, which was something you don't always see at mountain bike events.

The trails in te the first loop were mostly fire roads and double track, with one short but steep section of singletrack which appeared to have been newly cut for the race. Most of us got off and scrambled up the trail here.  Other than that there were a few rollers but no sustained climbs - my Garmin said that we did about 500 feet of elevation during the first lap.  We were mostly in the woods- not too many views but really beautiful scenery.


As you can see in the map below, the 35 mile route included a shortened version of the same loop, then an additional 17 mile Middle loop.  We were feeling good and anxious to get to the view in the higher climes, so we opted to skip the second loop in favor possibly adding the burly Northern Loop to our day's adventure.

We crossed the highway and started into the Middle Loop, sweeping vistas opening out in front of us as we descended down into a wide open valley.  There we bumped into my dad's neighbor / mtb buddy Nancy, who was offering medical support to the ride and was en route to do the full 50.  She is a fantastically gifted athlete and a speedy climber, but since she was hauling all of her medical gear around (on a beefy Specialized Hard rock, not a light bike), she was well matched to our pace.

The three of us rode along, staying on the shoulder as we circumnavigated the base of Copper Mountain.  The roads were wide and smooth, in fine shape.

As we approached the southeast side of the mountain, we started gaining elevation- the beginning of our first sustained climb.  It was a comfortable, gradual march- the sun got intense a few times, but a cool breeze swept through every few minutes just when I started to get uncomfortable.  Nancy was feeling good so she went ahead.  I opted to stick with my dad and keep the pace comfortable.  About 20 minutes in Dad started to feel a bit hungry, so we stopped an ate a bit of food.  Although he wanted to push on to the saddle, I (gently) insisted he eat right then... the most important lesson in endurance bike riding I've learned is to eat as soon as you feel hungry- ideally, even before you get hungry- and drink before you are thirsty if you want to have a good day in the saddle.

After about 30 minutes of climbing, we topped out at Curren Saddle, the high point of the 35 mile ride.  The rest station up here was a lovely view indeed, and well stocked- we munched on trail mix, fruit, and Doritos (Doritos! yum! gross.. yum!), as well as your more typical endurance offerings- Hammer gel, beverages, etc.


We took a few moments to enjoy the view and decide whether to take on the northern loop- 16 more miles and an additional 1800 feet of climbing.

I was feeling a little cooked from the climb, but felt good enough to continue... plus, with a belly full of Nacho Cheese Doritos, Clif Bars and gorp, I would soon be good to go!  Dad and Nancy were both up for it too, so we skipped the cut-off road and headed off into the northern loop.

We rolled on from the station and enjoyed a nice long stretch of downhill, probably 2-3 miles. I took off and let the bike go a bit, around the smooth corners and over the rocky sections with a big grin plastered to my face.  I appreciate and even enjoy, to some degree, the pain of a climb, but I freaking LOVE riding my bike downhill.  I slowed up a few times to wait for my Dad and Nancy- Nancy was having a little trouble with her bike bouncing all around, so we stopped to let some air out of her tires, which turned out to be the proper fix.  Dad opted to keep riding, as he was pretty sure we'd catch him during the first few minutes of the climb.

The trail turned upward again and I geared down and got into a regular, rhythmic breathing routine, feeling good but not wanting to push it too hard.  I hung with Nancy for awhile, but her pace was just a little too hot for me so I slowed up and watched her her disappear around the corner.  I kept to my pace and to my regular breathing, enjoying the views and rolling my shoulders around to keep a kink from setting in in my back/ neck.   Around each corner I expected to find my dad, but he was having a good ride and was moving faster than I had expected.  I rode on, enjoying the solitude, as I meandered up the gradual ascent.  I settled into a pedal-turning trance and kept breathing, the miles and elevation ticking off on my GPS. The trail was so gradual that there were stretches when I couldn't tell if  I was climbing or riding across the flat, save for the numbers on the Garmin moving steadily upwards.

As the climb continued, the trail surface turned from smooth gravel to chunky boulders, and my zen-like trance turned into a glycogen-deprived daze as I struggled to turn the pedals smoothly over the increasingly bumpy terrain.  The rocks started to zap my stamina and I found myself growing increasingly grouchy about facing this ride solo.  Where was my Dad? Why was he not waiting for me? Why had I thought it would be fine to do this on only 4.5 hours of sleep?  Why the hell did I drive 5.5 hours in the middle of the night to do this ALL BY MYSELF?  sWhy was this starting to hurt so bad?  Why were the rocks getting bigger?  Wherethefuck was my DAD?

As my rage/ frustration/ bitterness started to grow, a little tiny voice from the rapidly-shrinking rational corner of my mind spoke up.  "your're getting hungry! And acting crazy!" it whispered.  Perhaps this anger in my belly was due to a lack of food...  I pulled off to the side of the trail got off my bike, and ate a snack bar, downed a shot of gu and a drank a few big tugs of water.  As my breathing slowed and the food hit my tummy, the crabbiness began to recede.  As I looked around, realizing I was in possibly the most scenic section of the ride yet, and my outlook began to once again resemble the sunny weather. I gave myself a few more minutes to recover, then hopped back on the bike, ready to stab this beast.

After another 20-30 minutes, the trees thinned a bit and it became apparent that I was nearing the top. I rounded the final switchback to find a rider tending to a broken deraileur hanger- an easy fix if you have a replacement hanger, but a major bummer this far from any sort of support.  I stopped and chatted for a few minutes, but there wasn't much I could do to make his bike work,so I took his name and rider number and promised to alert the ride crew to his situation.  He seemed to be in good spirits despite the mechanical- he had just spooked a big moose and was curious if she'd come down across the switchback below, where I was.  I was bummed to miss a moose sighting, but also relieved to not encounter a moose on my own...  those animals both thrill and terrify me.

Ten minutes later, I topped the last ridge and pedaled across the high point-- a bit anti-climactic since the timber edges of the trail were blocking the views. Still, it felt great to be on the downhill side of a 90 minute climb. I expected to see Dad and Nancy up here waiting, but there was still no sign of them. No matter-  I let go of the brakes and let 'er rip, knowing I'd catch them between here and Marie Saddle.  Sure enough, I came around the corner and there they were on the side of the trail... Dad's jersey hanging in shreds off of his back!

"What happened?!" I asked, worried that he'd taken a crash around a corner. He told me that he had gotten in a confrontation with a large brown bear, but that ultimately he'd come away the victor.  I think the true story had something to do with the branch of a tree rather than a brown bear, but I like the brown bear version better.

We continued down to Marie Saddle, where we enjoyed a few more snacks and drinks, told the medics about the guy with the mechanical, and filled up our water bottles one last time for the last little climb and final 10 mile descent (!!!!!). 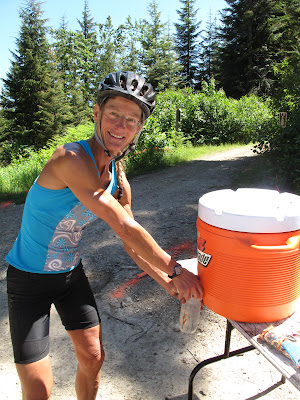 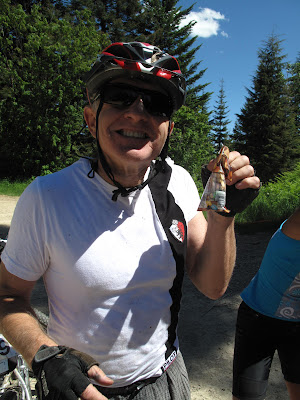 The rest of the trip was a screamer.  We left Marie Saddle with a group of riders who weren't afraid to open it up on the descent.  I followed a fast rider down Roller Coaster, a smooth, fast flowy fire road  with perfect corners and rippin' straightaways.  I stayed just at the edge of my comfort zone, fully enjoying every second.  Turns out that I missed another moose sighting- apparently the guy ahead of me spooked a young bull, which galloped ahead of the bike for a good 200-300 yards before it turned off the trail into the woods.  Damn!

We stopped at Mason Saddle to regroup, then took off again for the bottom half of Roller Coaster, the last part of an epic 43 mile bike ride.  All in all, an incredible adventure that I'd gladly do again in a heartbeat! 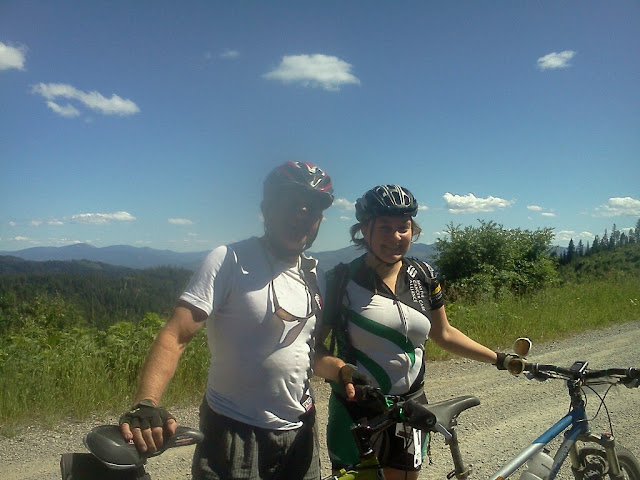