In September, we celebrated a huge milestone around here-- our first honey harvest.Our ladies did such a great job producing honey this year that we decided we could take some without harming their winter honey stores.

This was quite a learning process for us.  First, we had to figure out how to get the honey out of the hive.  According to google, a number of methods exist. There's the chemical approach, where one applies a bee repellant to the hive.  Blech.  Totally not appealing to me, as this defeats the purpose of natural/ organic beekeeping.  Alternately, we could buy an expensive bee blower and  blow the bees out.  This was also not appealing, for cost reasons and because it seems unpleasant for the bees.  Some people also just brush bees off each frame, but in general, I'm not a big fan of the bee brush because it aggravates my bees and I'm more likely to get stung.

The method we settled upon employs a device called a "bee escape," which is basically a bee maze in which bees can crawl down, out of the top box, but not back up.  This method works because bees navigate with a set of specific rules.  When they reach a wall or corner, they always travel to the right and follow the wall until they reach a corner.  They never turn left. So, as long as you build a maze with right-leading exits, the idea is that the bees won't leave.  I found some plans online then recruited my favorite carpenter to help me build the bee escape.

We cut some triangles and rectangles, and placed them on a plywood backing. 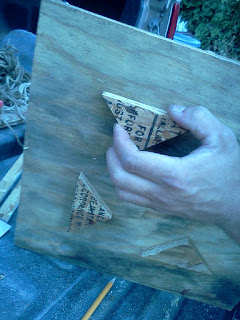 We then stapled them to the backing. 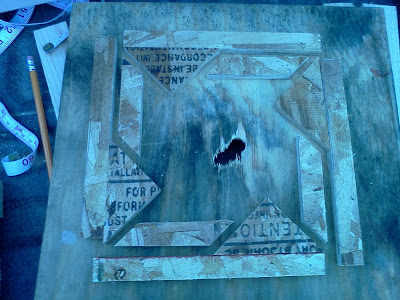 We covered the shape with metal screening, then added a frame to the top and bottom, drilled a hole in the top, and added sides to create space. 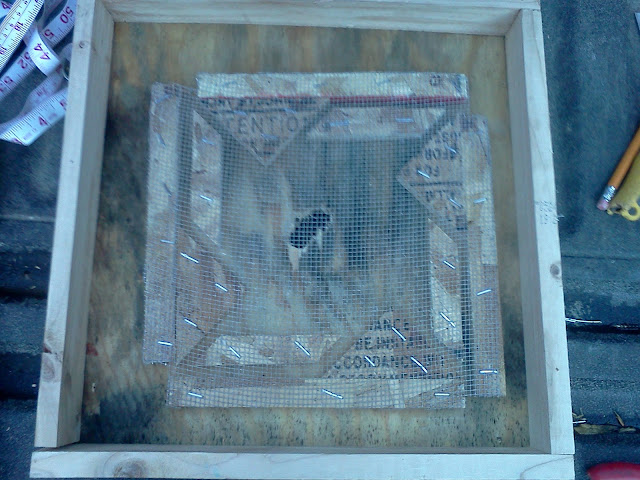 Once it was all done, I realized I had made some mistakes in assembling, leaving a few right-hand turns that would lead back into the screened-off area.  But, assuming it would be pretty effective anyhow, we slipped it under the top box and left it in place for a couple of days.

My co beek Venessa came over for the big harvest a couple days later.  We removed the top box to find a cluster of bees at the top of the bee escape. 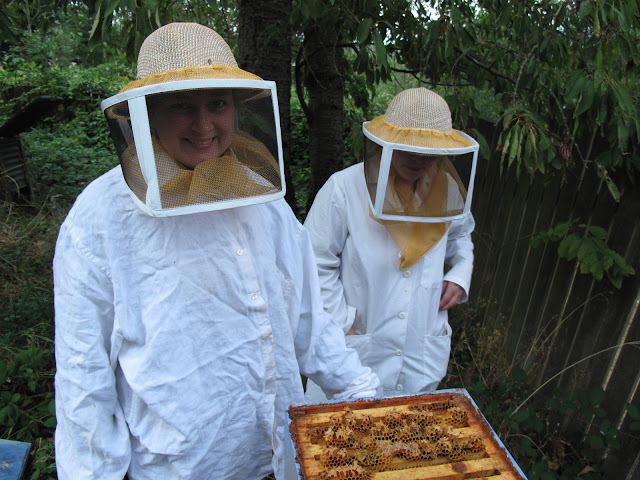 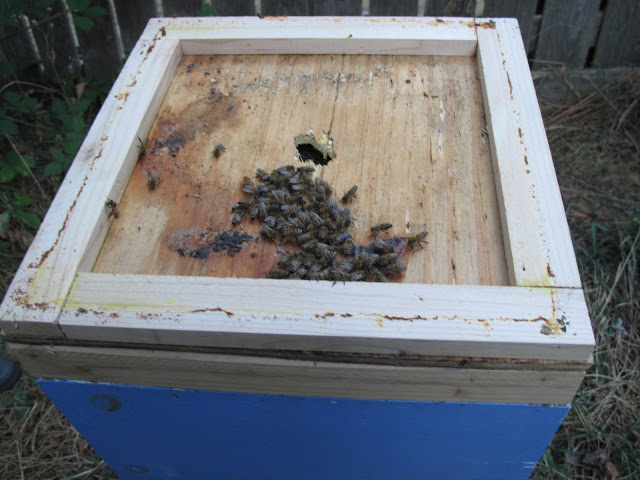 Most , but not all of the bees had cleared out of the box, but there was still a considerable cluster in the middle three frames. 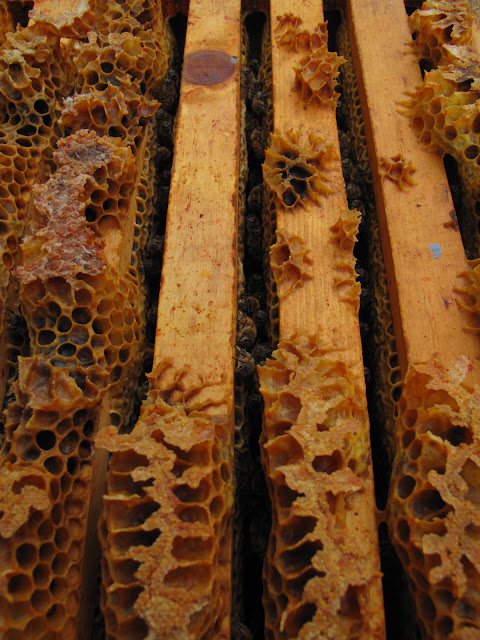 It wasn't until we inspected the center frames that we realized why those bees hadn't left- the three frames were full of brood.  Bees don't leave brood if they can help it, because they have to keep it warm before young bees hatch out.

We harvested the outside combs, leaving the three in the middle with the cluster of brood (stay warm little beezies!). We uncapped the comb and tasted it (delicious liquid sunshine, absolutely incredible). 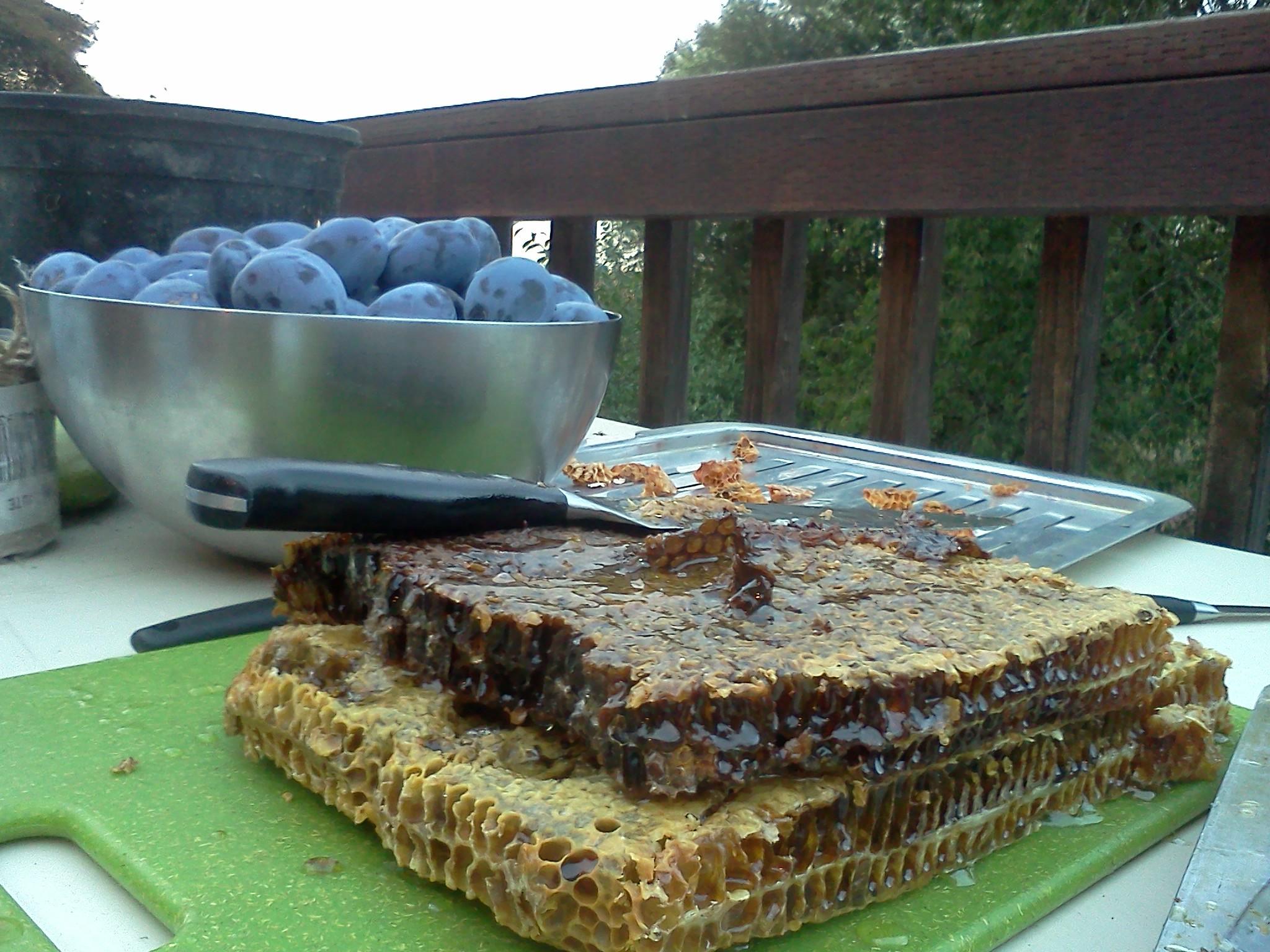 We then crushed the honeycomb into the top bucket of a two bucket system. 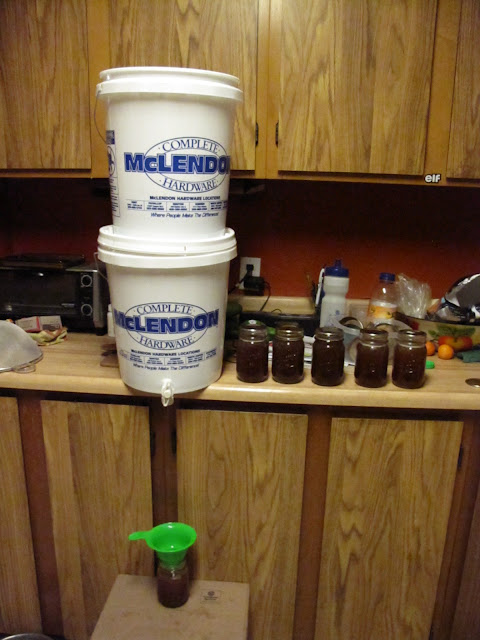 We drilled holes in the bottom of the top bucket, lined the bottom with cheese cloth, and let the crushed comb drain into the second bucket. 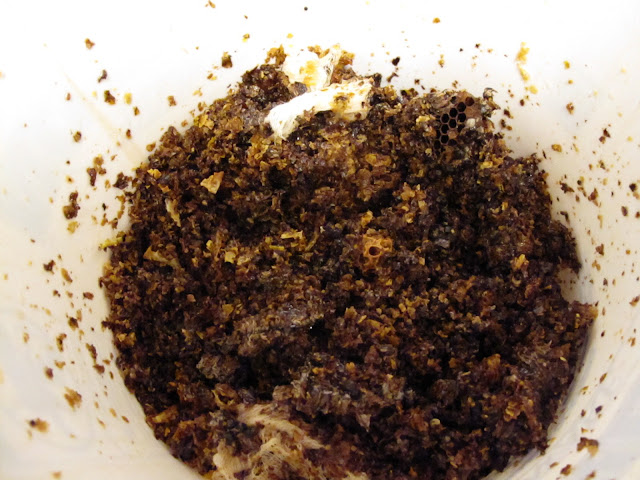 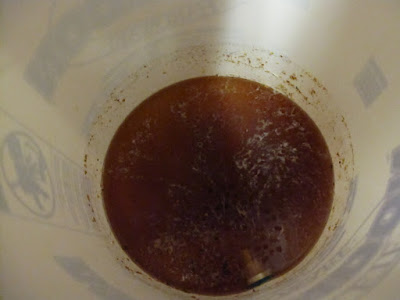 We punched a spicket into the base of the second bucket, then let the honey drain into a Mason jar with the aid of a canning funnel. 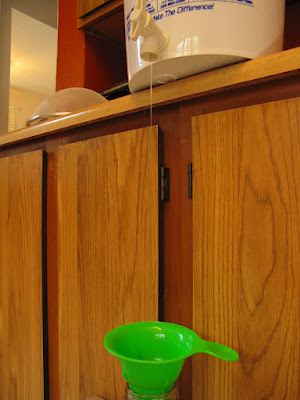 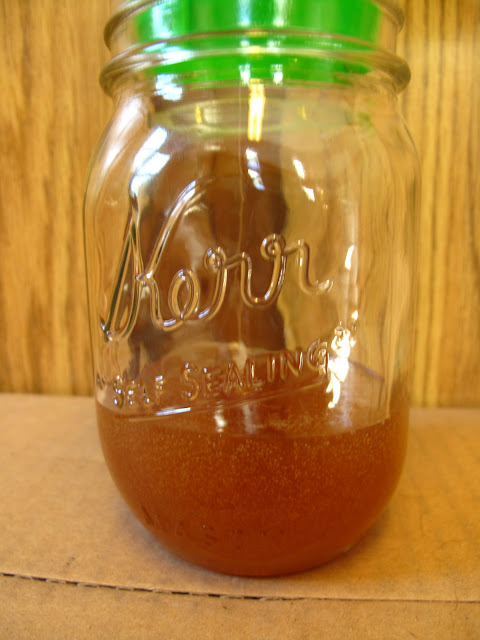 Our total yield was 8 pints- not bad for less than half a box of honey.  We enjoyed the first jar for Rosh Hashana and Yom Kippur.  A sweet beginning of the year indeed.

I'm jealous. I am be excited to get our honey from our hives in the spring (is that when you can harvest after the first year?) We got our bees in April last year. We plan to let them keep their honey this winter but come springtime, it will be fun to check on them. I like your right turn only excluder. I'm with you on the chems--ick! :-)