Cookin in the Kettles at Whidbey Island

Sunday's race was blessed with the best weather, by far, in this mountain bike series.  The scenery was also superlative.  Jill and I warmed up in sunshine, taking in the views. 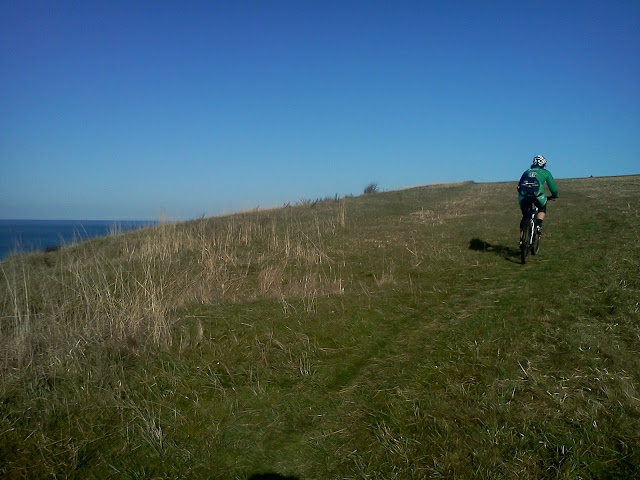 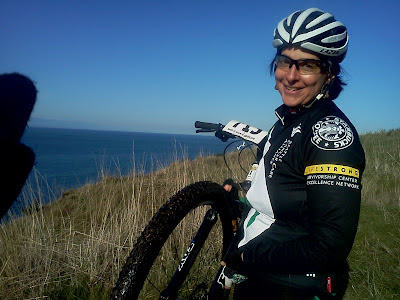 Tucked just behind the sunny bluffs, the shady woods promised to punish us. This was to be the hardest race of the season so far, due to about a thousand feet of climbing and plenty of techinical features-- switchbacks, rocks, roots, ruts.

We lined up in a grassy meadow at the top of the trail system and took off, stringing ourselves out along a fire road for a few hundred meters before diving into the forest on a well-traveled singletrack. I didn't go off as hard as usual, opting to hold back just a bit.  I found myself in  third place as we descended to a creek bottom.  The women ahead of me hesitated at the creek crossing, so I went past and was soon by myself out front. There was another small climb, then a longer descent down through four switchbacks, which made me grin. I love switchbacks. The feeling of whipping around the corner reminds me of racing in a slalom ski course, and I just love the way you fight with Lady Gravity just a bit at the top of a turn before joining forces with her as she propels you forward through the end of the switchback.

The final switchback of the descent had a very interesting root drop off, right before the switchback itself.  I opted for a wide line, to give myself a bit more room to make the corner, then celebrated when I cleared it.    (Note:  Someone set up a camera at this corner. It captured an entertaining variety of techniques.  I don't appear until about 19:40).


The trails wound along another creek basin before climbing up a shady but steep fire road, then topping out along a winding ridge.  A few more ups and downs established the pattern for the day- descend into a quiet, shady creek bottom, sweep along the flats in long, rhythmic turns, then a climb back up to the next ridge.

The pinnacle of this day for me was a somewhat technical descent that gave way to big, sweeping turns between giant cedars.  I glided from the outside line to the inside around each turn, using the whole trail.  I imagined that my bike tires were broad paintbrushes and I was making big paint strokes across a singletrack canvas.

I held on to the exhiliration of the descent all the way across the flats, but felt it soon drained out of me as I began to grind up the next climb- a steep one that seems to continue each time you think you're near the top. Random fragments of thought began to enter my oxygen-scarce brain. "Climb like a spider monkey" crept in- a refrain from who knows where.  I kept repeating this mantra, but I soon grew confused as to whether a spider monkey was in fact an insect or a mammal.  My mind slowly worked out that it must indeed be a mammal, but I remained perplexed about how the animal got its name.  And I definitely didn't feel like a spider monkey, maybe more like a spider sloth.  I am a slow climber.

As I was working all of this out, another rider worked her way up and was almost on my wheel before I noticed her.  Her pursuit jolted me out of spider monkey hallucinations and reminded me to focus and pedal.  I dropped her again on the next descent, and stayed out of contact across the flats. I had a nice gap leading into the final climb.  I dismounted and ran up a steep, long incline.  As I got back on my bike, I glanced back and was shocked to see her riding the pitch.  Ugh, those damned skinny climber types and their full suspension machines!  In a few more seconds, she was on my wheel, where she sat for the remainder of the climb, while I worked hard to try to regain my gap.  This was not to be, however.  Just as we rounded the last corner and topped off the climb, she darted past me and left me in the dust, no more than 200 meters from the finish.  I tried halfheartedly to catch her, but truthfully I had run out of gas.  I crossed the line in second place, but first in my age group and wearing a grin.  Dear Fort Ebey, I will definitely be back to ride these trails and be inspired by your beauty.