Our good friend Jeremy came up to visit from Oakland in late July, and Jeremy likes to ride bikes.  He likes to ride bikes so much, in fact, that he rode his bike the entire way to our wedding in Winthrop, WA from Seattle (the rest of us rode from Newhalem, which was rather epic all by itself).   His plans for this trip included a solo 200 mile effort from Seattle up to Vancouver, BC, then a second one from Seattle down to Portland.  Slacker.  To toughen him up, we thought we'd add a 20+ mile, 5,000 ft climb on dirt to the mix.

We had a great crew of 7 assemble to tackle this IMBA designated Epic Ride.  Present were myself and Chad, Jeremy, Tye H, and team mates Jilly B, Theresa H, and Brian T (Chase came too, although we left Lexi to take a nice snooze in the truck, which we parked in the shade).  We had bikes spanning four decades in age.  Jeremy rode the grandaddy, a mid '80's rigid steel Stumpjumper, Theresa rocked an early '90's aluminium bike of unknown branding, and I rode my trusty late '90's steel hardtail, Rocky.  Chad and Tye broght us to 21st century with Chad's mid-2000's steel Soma and Tye's full suspension Trek of the same age. Jill and Brian had the newest, shiniest steeds in the mix, Brian on his sweet Intense (4 or 5 years old) and Jill riding her gorgeous Indy Fab 29'er, custom built last season.

We camped the night before at the Greenwater, WA airstrip (just a bit north of Crystal Mountain, these trails are off of highway 410). 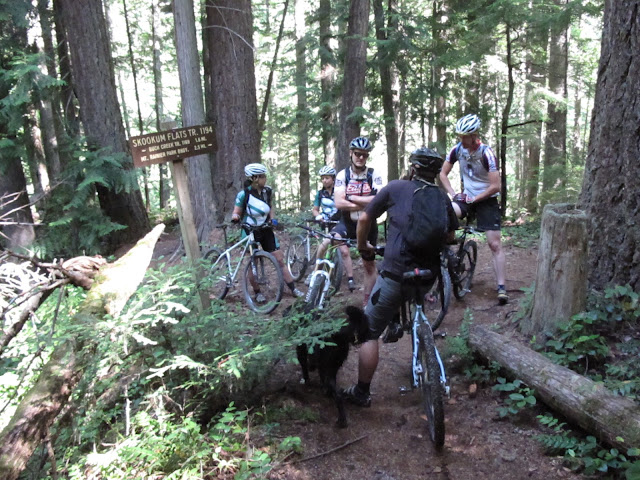 We put in less than a mile of fire roads until we hit Skookum Flats, the first part of the ride.  This trail wasn't steep, but it was extremely technical- lots of slippery roots, boulders, and chain-snapping ups and downs. 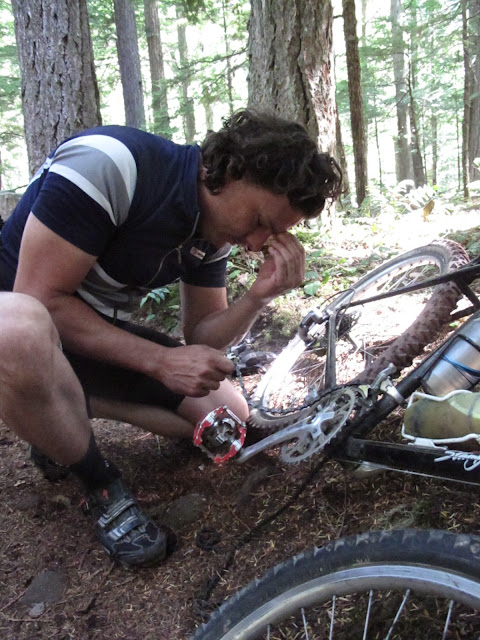 Jeremy's buddy Tony had warned us of the delicate state the drivetrain was in, and it didn't take more than the first grind up the hill for the chain to bust in two. Luckily Jeremy was prepared, and was soon rolling again one link shorter but otherwise unharmed.

We finished Skookum flats unharmed, although Theresa did nearly fall off the trail at a steep exposed section.  Her bike was not so lucky, and actually did sail down the incline, so she and Jill hiked down, retrieved it, then caught back up to the rest of the group.  The trail itself was in great condition, and there were plenty of water crossings, made easier by sturdy bridges such as this one. 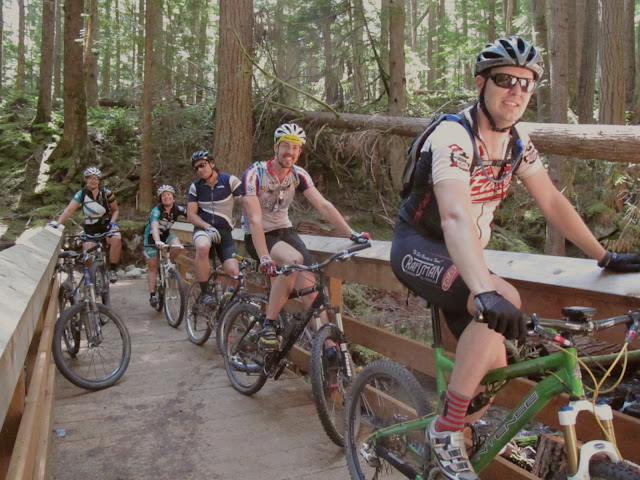 After about 3.5 miles of Skookum Flats, it was time to head up The Big Climb.  And by big climb, I mean 7+ miles, with a grade of about 15% for the entire way, until you have climbed about 4,000 ft.   Zowie.
This was a loooooong climb, and the grade made it quite challenging, but it was in the shade for the most part, and each of us tackled it at our own pace, stopping at about the halfway point to regroup and make sure no one was dying of exhaustion.  I stopped again about 3/4 of the way up to raise my saddle a little bit and stretch my back.


We reached the start of the singletrack, which we thought was the end of the climbing, and took a lunch break. 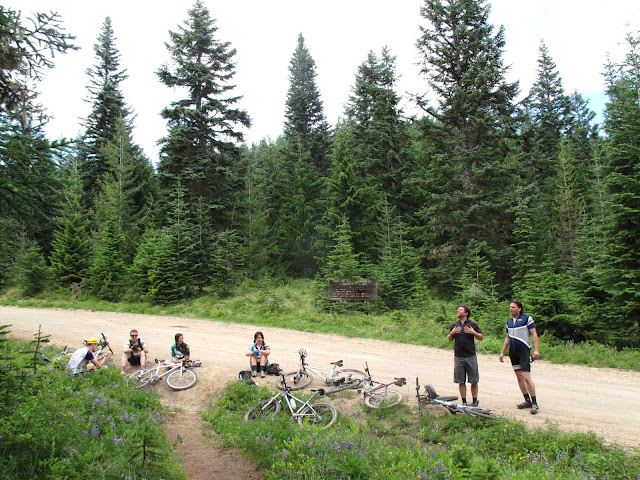 Lots of flowers were in bloom, including this beautiful lily. 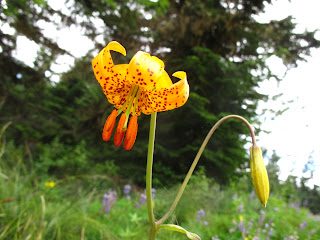 After lunch, we hit the singletrack and got ready for what we thought was the descent, but it wasn't.  The trail  went up, up up, at grades impossibly steep to ride.  I hopped off and huffed and puffed that additional mile to what was actually the summit. 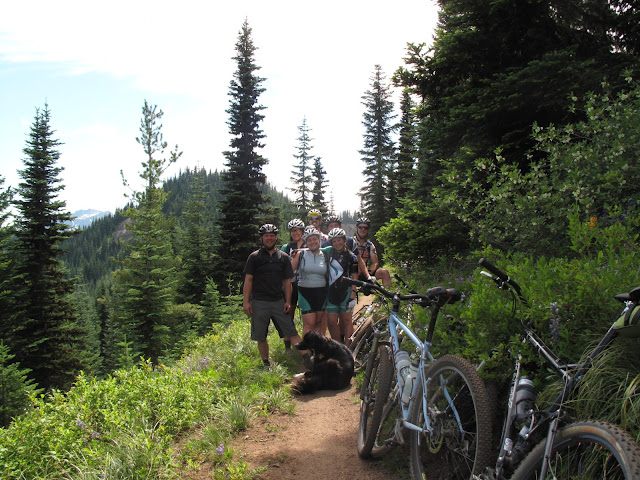 Once we caught our breath, we came around the corner to see a great view of Mt. Rainier.  A very sweet father daughter team snapped the above photo for us.  She was out for her first hike, and was way enthusiastic about the woods and about hiking.  She also noticed that Chase was a bit thirsty, and poured some of her water into a baggie for him to drink out of.  What a sweetie!

After all of that climbing, it was finally time to reap the rewards we'd worked so hard to earn with our gigantic climb.  Mt. Rainier popped out of view again as the trail dove back to the woods, winding around giant oaks and exposing us to some seriously steep drop offs.  Just as the momentum got going, though, Jeremy got a flat. 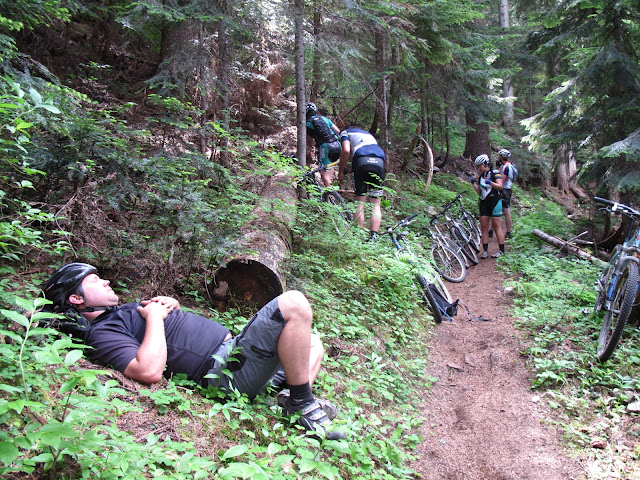 The rest of us camped out and took a little break while he fixed it.  Impromptu breaks on the trail are always appreciated, by all except the most hard core. 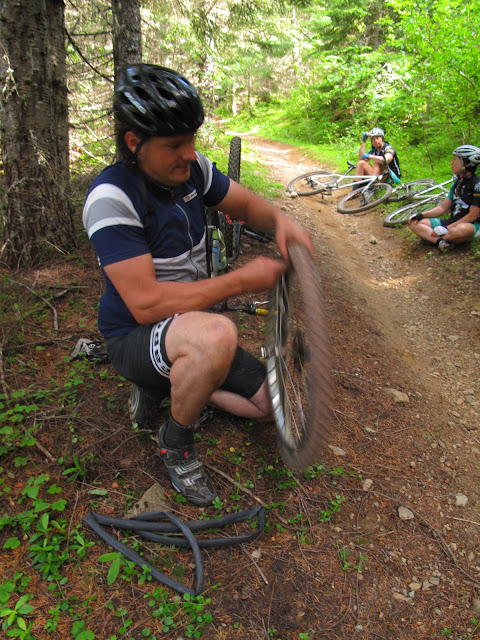 More naps ensued as Jeremy found the offending leak and patched it up (he's pretty quick at this, so these were little sub 10 minute naps). 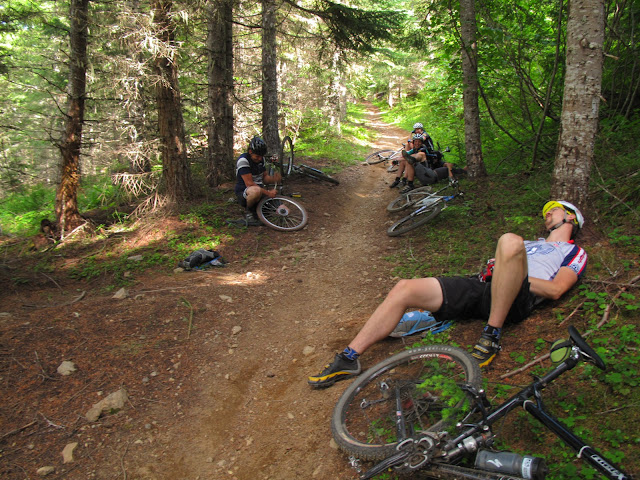 The trail wound through more beautiful wooded areas, flattening out to a nice smooth rolling surface.  A few hundred yards later, we popped out onto the side of a gaping canyon, sunshine coming in at a gorgeous late-afternoon angle that made for some pretty great photo ops. 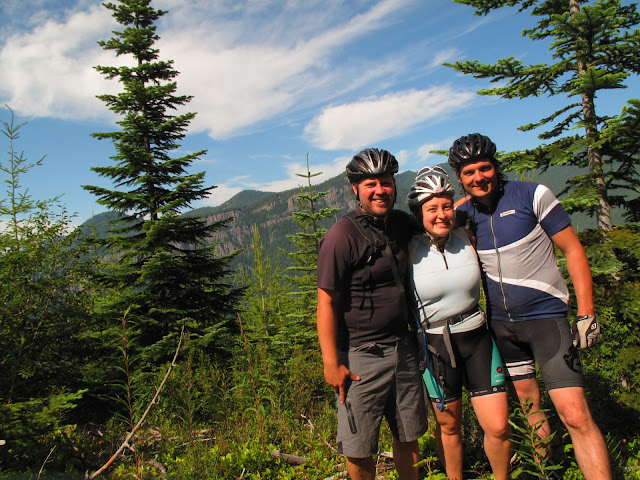 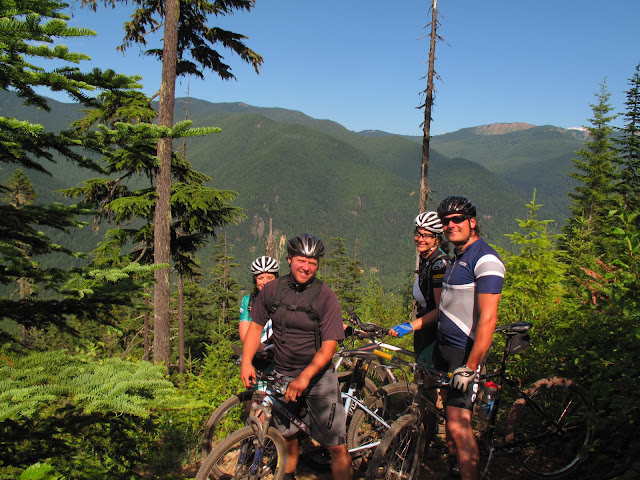 The trail wound down the side of the canyon through a series of well-placed switchbacks, our path narrowing in the undergrowth and new forest growth.  These conditions made for great views the entire way down. 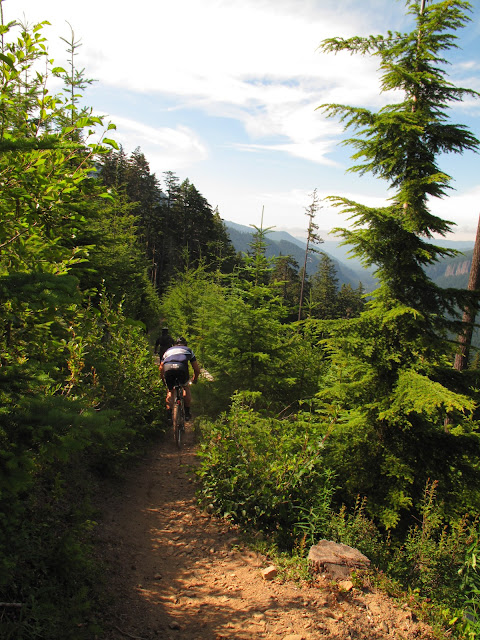 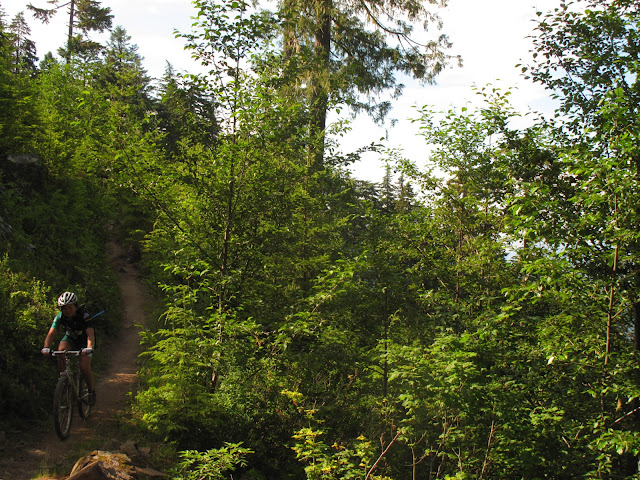 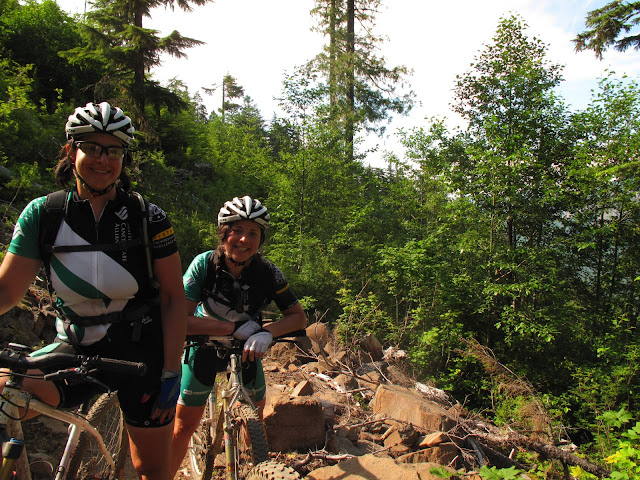 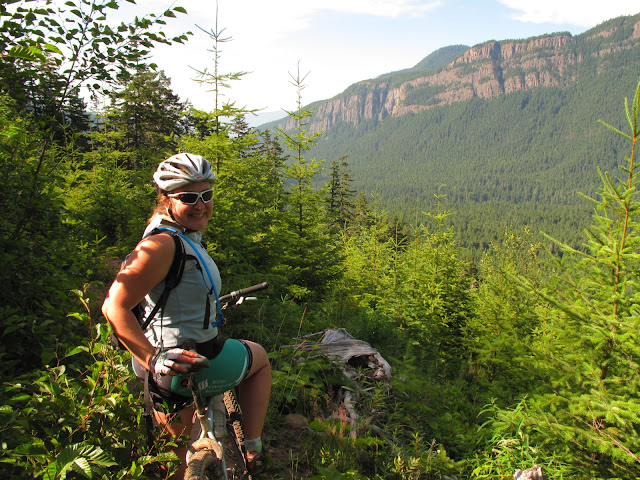 Towards the bottom, Jeremy got yet another flat.  Someone was riding on a worn out tire, obviously.... 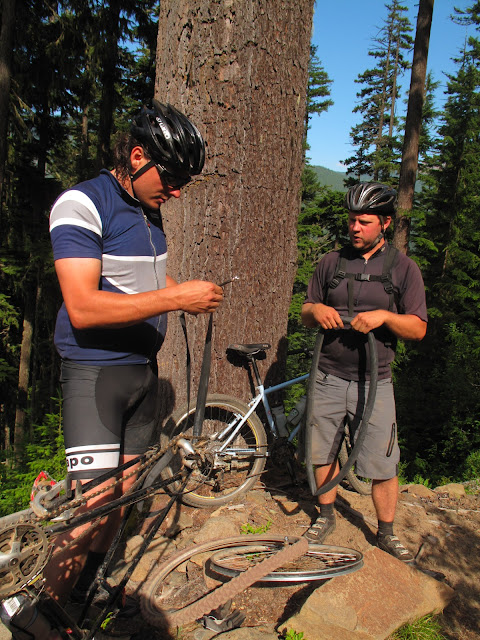 Chad agreed to stay behind to keep Jeremy company while he patched another tube.  I went on ahead with the ladies so we could catch up to Brian and Tye, who had already gone ahead.

A few more switchbacks and we dropped into the floor of the canyon, pedaled another half mile across the forest floor, and right into camp, where Brian and Tye were waiting with cold beers.

All in all a fantastic day.  Definitely one of the highlights of the summer.


Elevation profile, for the Strava-curious: