With our new footings dug and our beams replaced/ reinforced/ strapped down on our home's south and west walls, It was time to open up the easier walls to the north and east (easier because they're the "daylight" sides of our daylight basement, and not holding up a ton of earth uphill).  Chad demolished the drywall and framing, which was 12" in from the exterior wall of the house, presumably to cover up the plumbing main.  Once the wall was gone, though, we quickly discovered that the plumbing was not the only thing hiding.  There was also a gigantic hole in the slab, underneath which was standing groundwater. 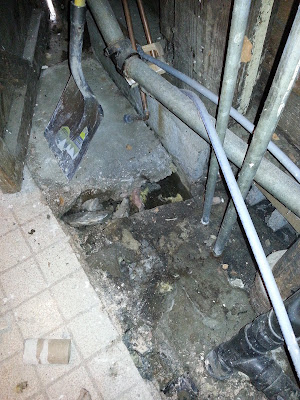 In addition to the standing water, Chad noticed a half-inch gap between the edge of the slab floor in the basement, which meant that this groundwater issue had caused some erosion, making the wall of the house move away from the slab.  Yikes. This was not, in fact, going to be the easy wall.

In retrospect, there was indeed evidence of a groundwater/ erosion problem. This stair step-shaped crack in the northwest corner of the house is a sign of settlement or erosion of the soil underneath that corner of the house.  Erosion, of course, is caused by water moving through dirt. 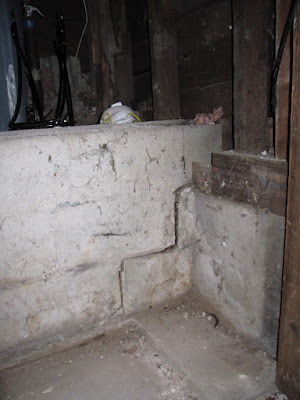 We suspected the water was coming down the hill and pooling under the foundation. Indeed, a big rainstorm had just blown through.  We had to rule out leaky plumbing, however.  To do this, we demolished the slab above the plumbing connections, and watched the area closely for a few days of normal water use activities (shower, dishwasher, laundry, etc).  Sure enough, a couple of days after the storm, things dried out, which told us that the water had indeed been groundwater. 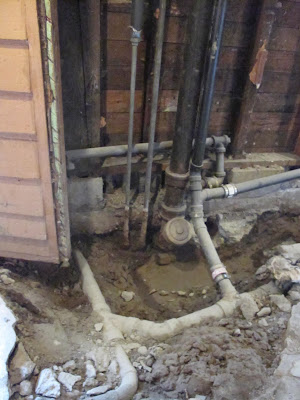 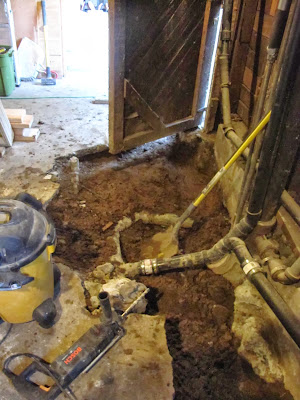 In a slight panic, we called our structural engineer for advice on how to handle this situation.  Visions of very expensive deep bore pilings filled my head. Luckily, Chad and our engineer hashed out a solution that wound up being relatively affordable (although labor intensive).

We demolished a 2' strip of the slab along the whole wall to make room for a new strip footing on either side of the plumbing main. 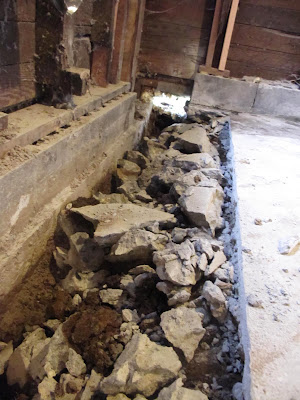 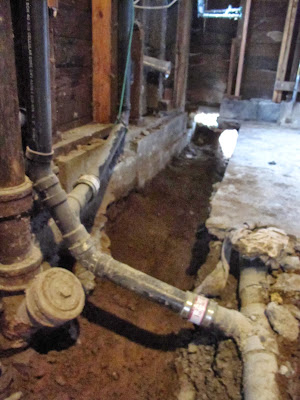 Before we poured the strip footings, however, we needed to address the drainage issue.  We decided to install a French drain, which is a perforated pipe that collects and carries water away from the foundation.  To ensure that water moves freely into the drain pipe, the drain pipe is then covered with gravel, so we planned to purchase and spread around 20 bags of gravel. When we got to the hardware store, though, we made a miraculous discovery:  the EZ-Drain! 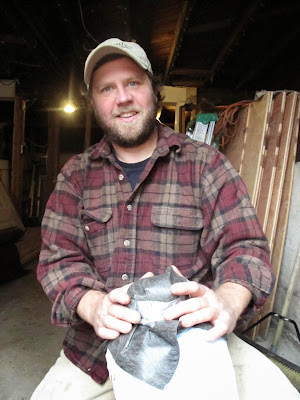 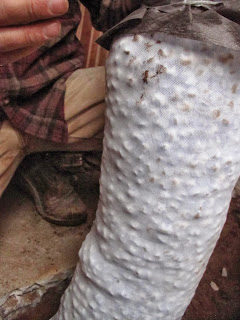 This ingenious invention includes a perforated pipe that comes pre-wrapped in permeable fabric which is filled with plastic peanuts.  The peanuts serve the same function as the gravel- water flows right through and collects in the pipe.  A 10' length cost $47.10, which in our minds was a fantastic bargain compared to a solid day of shoveling gravel.  We covered the end with landscape fabric and duct taped it on, then "installed" it, which consisted of setting it in the trench. 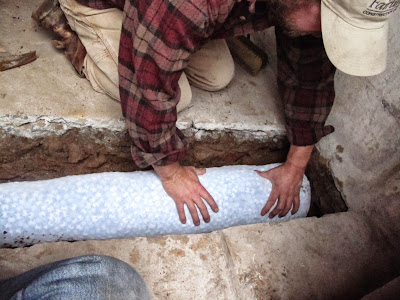 We attached two more plastic pipes (non perforated, this time) to the end of the EZ-Drain, and checked the slope of the trench to make sure it was sloping enough to encourage the water to flow downhill.  We then extended the trench about 10' beyond the exterior of the house and down the slope in our back yard. 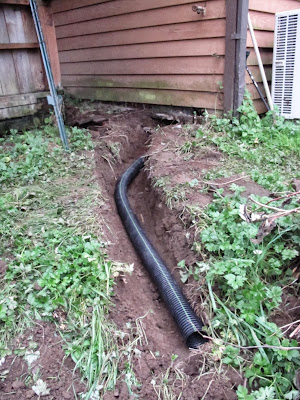 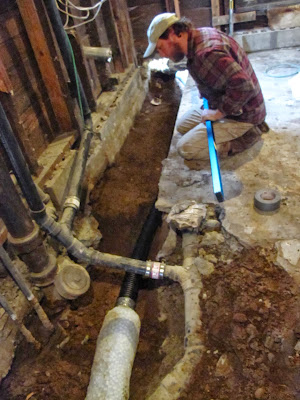 We covered the drain and the exit pipe with dirt.  Next, Chad drilled deep holes into the existing foundation, and stuck a piece of re-bar into each hole. 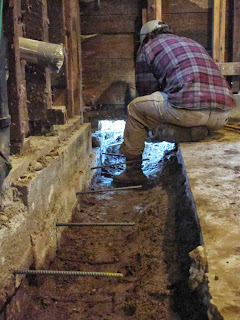 He secured each re-bar piece in the hole with two-part epoxy. 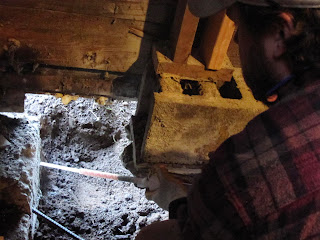 While the epoxy was drying, we placed two long pieces across each of the short rebar sections, and tied it all together at each intersection.  We then built some basic formwork, in preparation for our big footing pour.  2 days and 60 bags of concrete later, we had two beautiful new strip footings, and a lot more peace of mind. 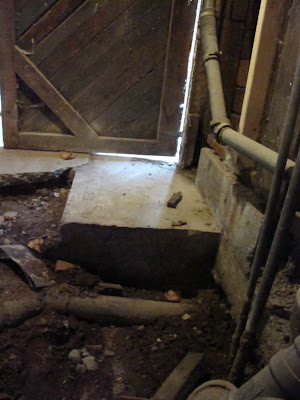 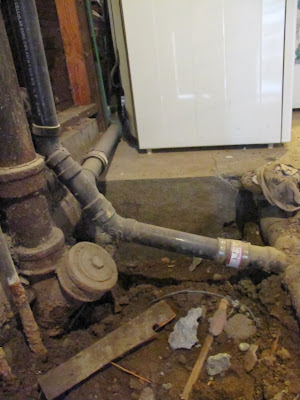 New footings to the left and right of the plumbing main.

Aaahhhh! Home-ownership. I can't wait until I can get more active on my house!

Never a dull moment, right Christian? I'm excited to hear about your project plans. How's the back?

Wow nice topics you have chosen...!!!

Thanks for sharing and hope that we will get new from you..!!!

It’s nice to know that you immediately called your engineer to help solve your problem. It’s the wisest thing to do, than trusting your DIY ways to fix those pipes. It’s been a while now, Meghan. Hope you didn’t experience other problems with those pipes. How are you?

After a very wet and rainy weekend, I'm happy to report that there are no leaks in the basement! The French drain solution seems to have worked. We're now into framing... I'll update the blog with more info on that soon. Thanks for reading!