With our foundation work nearly complete, it was time to move on to the chimney demoliton, one of the bigger tasks of the remodel. In the photo below, you can see how large the chimney base was (the structure on the left side of the photo). It was also smack dab in the middle of the new bedroom, so it had to come out. 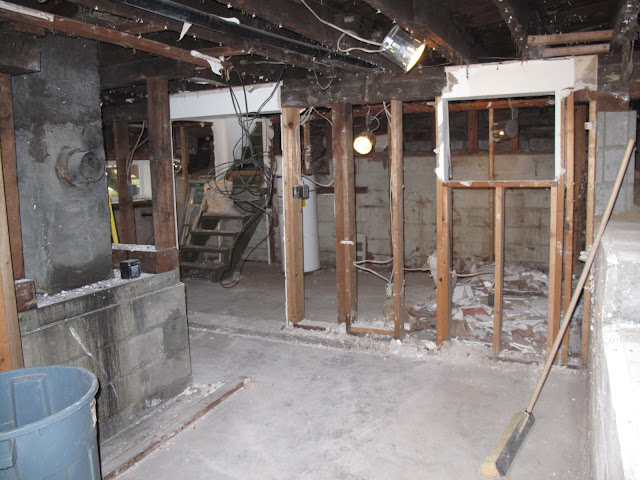 We chose a dry day to pull down the exterior section of the chimney.  Chad borrowed a fall protection kit, strapped in, and got to work chipping the chimney apart, brick by brick.

He lowered buckets of bricks down with a rope, where I waited on the ladder to carry the buckets down the ladder.

The entire process was a great leg and core workout, let me tell you.  We did take a couple of breaks to enjoy the view.  There's really nothing like a good roof sit- the change in perspective can be quite remarkable.

By the end of the day we had the entire exterior portion of the chimney down, bricks stacked neatly for a second life as a patio or pizza oven, perhaps.

The following weekend, we recruited some help from our friend Dan and got to work demolishing the interior chimney.  We started in the attic, then worked our way down to the second floor. 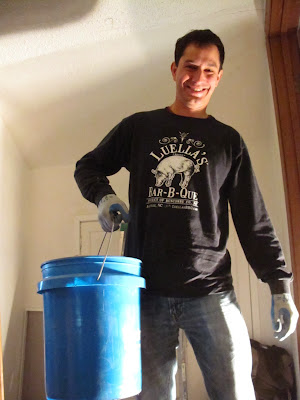 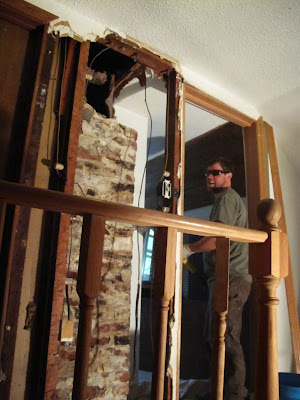 The bricks came apart very easily, with just a little help from a hammer and chisel, or sometimes even just by hand.  We did need the sledge hammer to break apart the terra cotta pipes in the middle of the chimney.  A few of those came out in tact, so they may see a future life as an outdoor chimney stack or a planter. 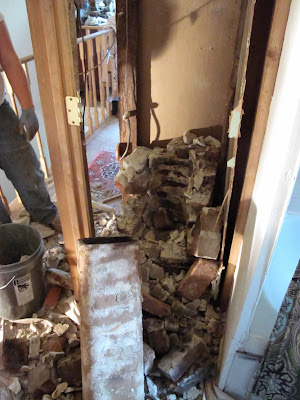 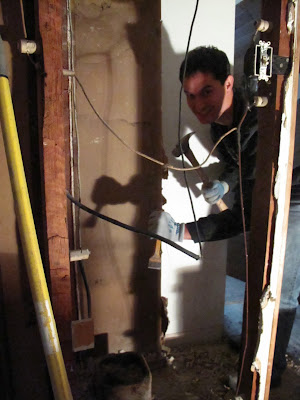 The second floor went quite quickly, and after just a couple of hours, we had demolished brick all the way down to the first floor. 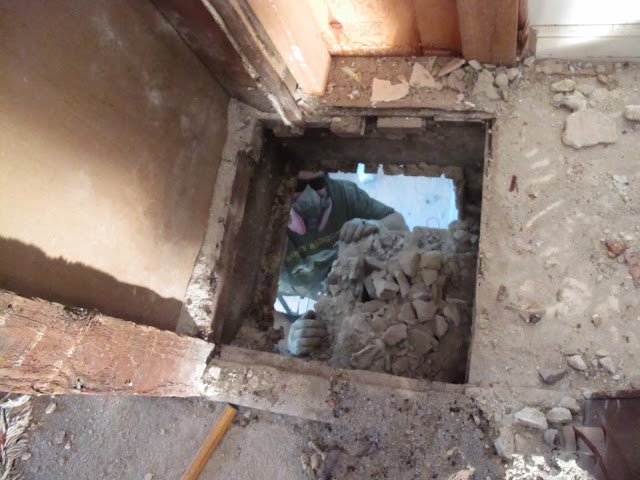 The upper third of the first floor came down in a similar manner, until we got to a section of chimney that had been reinforced with cement.  Yes, cement.  I'm not sure why this was done- I think perhaps it was part of the original chimney work, because the bricks were more orange and somehow more sturdy than the reddish and sometimes-crumbly bricks from the higher part.

Cement be damned, Chad got to work pounding that chimney apart.  One minute it was there, and the next it was gone.  Voila!  Just kidding.  This part was a major pain in the ass, and took nearly twice as long as the other two floors.  The cement was quite strong, enough to keep the bricks from popping loose easily.  So, we brought chunks of brick-concrete rubble out bucket by bucket.  Phew.  Such physical work. 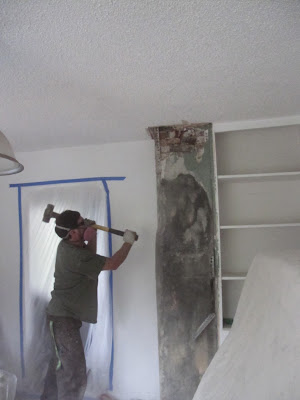 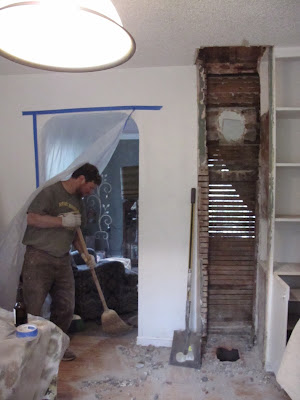 As we worked our way down, it became apparent that the chimney cement had been poured directly against the plaster of wall behind it.  Sure enough, we had some collateral damage to our living room wall.  Luckily, it's a wall that is coming out, so in the meantime we'll live with this hole.  Chad thinks it looks artistic. I snapped the photo on the right from the basement, looking up- pretty sweet that you can see up through three levels of floor, all the way to the attic ceiling. 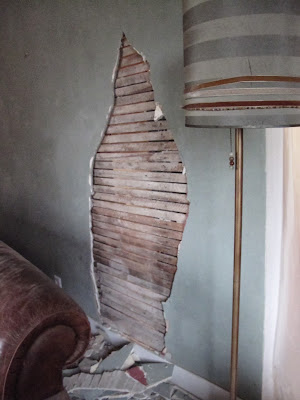 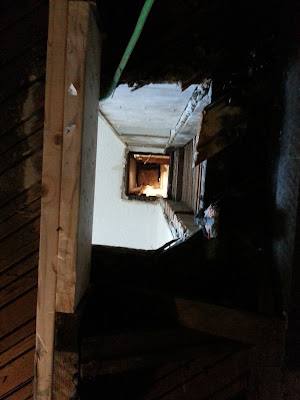 The final phase of the chimney demolition stretched out into a third day.  Chad rented a jackhammer and hammered apart the cmu and concrete base. When he was done, all that remained was a small elevated slab.... 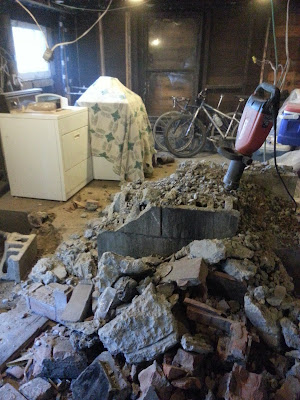 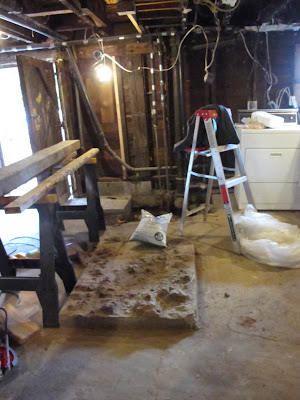 And a gigantic pile of rubble. 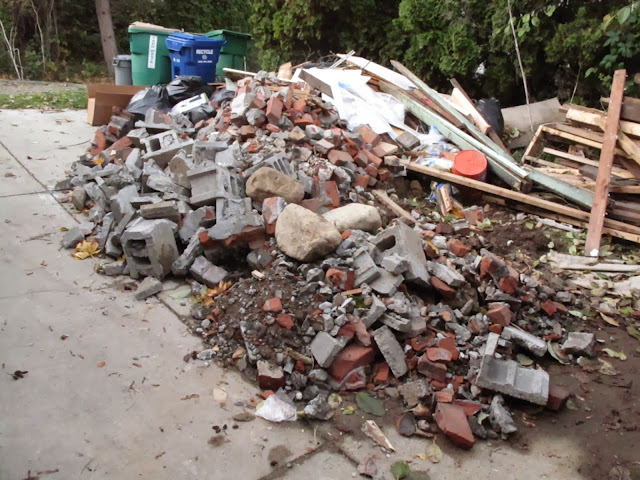 While this project demanded physical, exhausting work, it was deeply satisfying, and I love that we've been able to reclaim the space the chimney was taking up. 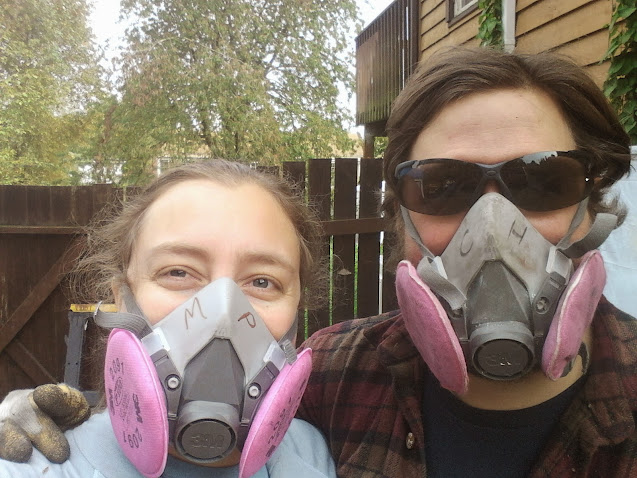 Awesome work! Most people would not touch chimneys in home renovation projects, but you and your friendly neighbors were able to do it at minimal cost. And great exercise, too!
Arthur Bryant @ Contractor Express