Last week, our team hosted our annual Starbucks Gran Prix Cyclocross race at Marymoor Park.  I haven't been racing this season because my thyroid has been misbehaving, which has made any kind of endurance activity difficult. I headed out to Marymoor to help out with race support, cheer for my teammates, and enjoy the debauchery as a spectator. Our team showed up in grand style, rocking an amazing assortment of costumes and collectively kicking ass. We had a gender bending French maid, and a sporty cowboy. Yosemite Sam and Alvin of the Chipmunks were on hand, as was a recently escaped convict. A unicorn head kept making appearances, this time in the hands of an old (but cute!) lady, Miss T.   TBlaze's costume, though, was my personal team fave.  The level of detail in this Kiss costume was so good, it was borderline scary. 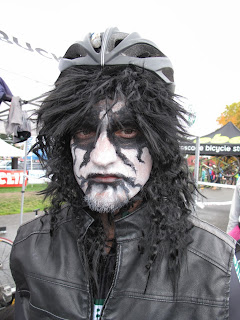 Teammates were also representing our new Dronken Eenhoorns coat of arms, which features a unicorn and a hop. I spent some time waving the flag, which is much large than it appears in the photo. My other two favorite costumes were the Beer from Here, and also Elliott and ET.  Genius. 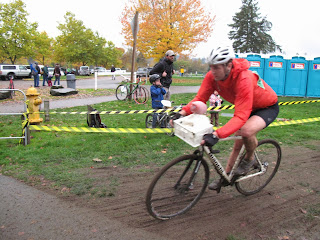 It was great to spend some time with these crazies, and I'm looking forward to getting back in the mud next season.