Bay Center, WA to Seaside, OR 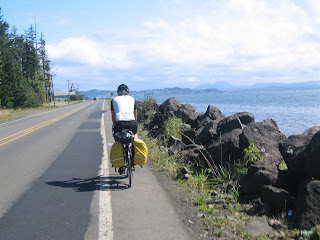 We started AGAIN this morning in the rain. Frank keeps saying, "nice summer you are having here!" and laughing. He is quite strong, so we have taken to calling him Frank Schleck for hauling us up the mountains, and also he is HUGE-- 6'7". Chad has gotten very strong too, and has had virtually no back problems since we left.

The ride from Bay Center started out very beautiful-- we passed a national wildlife refuge on salt flats, and were able to view lots of birds along the way. We also saw a large herd of elk-- 20 or 25 animals.

Today we had our first mechanical issue-- Chad's chain broke on the way up a climb, but we are well prepared with lots of tools and extra chain links, so we were rolling again within 10 minutes.

We stopped for a rather marginal lunch in Chinook, WA, where no one could believe we had come that far on our bicycles. Five miles later, we crossed the HUGE bridge to Astoria-- probably the most exciting/ nervewracking part of our trip so far. The bridge is 3 miles wide with a 500 foot climb towards the end. The view is absolutely spectacular, and we were looking down on the backs of multitudes of migratory shore birds as we crossed the mouth of the Columbia. There were also HUGE ships crossing underneath the bridge.

The descent from the bridge down into Astoria was harrowing-- very steep and winding, although with a great view of the victorian homes in Astoria. We stopped at a bike shop, where I tried to resolve our second mechanical issue-- a squeaky wheel on the trailer I'm towing.

Turns out all the rain has seized up one of the bearings, but no bearings could be found in Astoria, so we lubed it up and pressed on.

From Astoria we continued on to Seaside, nineteen miles further. We had a quick dinner in Seaside and gave the beach a quick nod, then hurried to find camping before nightfall. It was a little bit too long of a day, and we agreed that we need to start riding earlier in the day.

One funny thing about our campsite-- they had free elk viewing for the guests (it was another RV park), but there also happened to be a great many cows, from what we could hear. We saw neither cows nor elk, but supposed that perhaps they put antlers on the cows and told tourists they were elk! Tomorrow we will try to leave earlier.

it's really nice to hear about your trip! i really like that you have made friends with lots of random people. staying at dave and cathy's sounds like so much fun! what a great adventure. keep up the great blogs and stay safe.