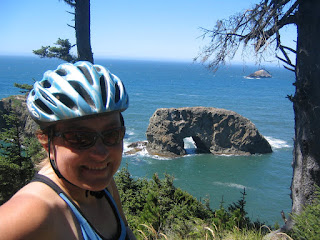 We left camp early this morning with Frank and Rike. A little before Nesika Beach, Frank pulled over and scanned the ocean..... and pointed out a pod of WHALES. Grey whales, feeding really close-in to shore-- first the babies came then the adults, the whole experience was absolutely amazing. It was incredible to watch them blow air and then watch their backs as they resubmerged. This really made Oregon complete for us! It was so moving to watch the whales I actually got a little bit teary.

Frank and Rike, although going for a shorter day than us, were riding a bit faster so Chad and I slowed down and stopped for a lunch break at Arch Rock, a really neat arched formation in the water. We relazed awhile, then he aded on, past harris State Beach, where Frank and Rike were camping. We waved goodbye and headed on. 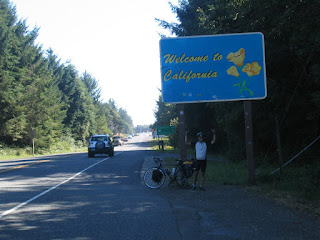 About 20 miles later, after rolling though lots of flat agricultural land, we finally reached the CALIFORNIA BORDER! It was marked with a large sign, standard, that said "welcome to California," but when we stopped to look, cyclists had written on the signposts messages with their names, origins and destinations. Chad and I added ours, of course.

twenty more miles later we got to crescent city, hot and exhausted. We had no idea where to stay, so we decided to spend our first night in a hotel, which was a GREAT decision by Chad after a long, hot day. The only bummer is that I realized I had left my knee warmers at the California border when we were signing the post-- oh well, hopefully some cyclist picked them up and is enjoying them. 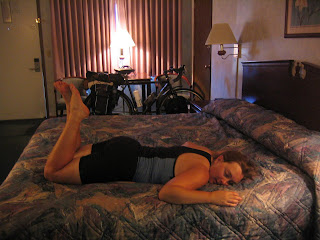 We took LONG hot showers and ordered chinese take out, then vegged out in front of the tv for awhile before falling asleep. Today was long-- 80 miles, 3346 feet of climbing, 11.1 mph average, temperature around 95 degrees! We are getting legs of steel!
Posted by Megbikes at 2:56 PM

HI Guys;
WHAT Fun!. I'm totally in awe.
I'm totally envious of your adventures. Kim gave me your address so wanted to add my congrats and encouragement to your trip... We'll stay in touch.
Duff Judi et'all

Great to hear the ongoing accounts of your adventures along the coast. I'm sitting in Valdez, AK right now waiting on weather so we can fly in the heli to the Bering glacier to check on our research stations (gps and seismic). Good luck with the rest of your trip. I'll try to get a hold of you when you're back in civilization.

Nice work on all the miles and elev. gain!

Sounds like you guys are kicking butt! Love the stories and look forward to hitting the roads with you when you're back - if I can keep up. I got a new bike, so maybe that will make up for something.

I love being able to follow your travels. It is totally amazing to me what you two have set out to do!!! I am sure you two are having the time of your lives!! Can't wait to read more!!!