Today was incredible!!! We took off from the Econolodge around 8:15, took a quick stop at the grocery store, and began climbing shortly after leaving Crescent City, up, up, up into the Redwoods. This climb was supposed to be one of the harriest in terms of narrowness, steepness and heavy traffic, but when we started up it the road was under construction and the entire right lane was closed to cars (but bikes were no problem). As we got further up they had traffic stopped in both directions but allowed bikes through, so we basically had the road to themselves, which was a blessing.

We continued over the summit and down the descent in solitude, as the road wound back down to sea level. 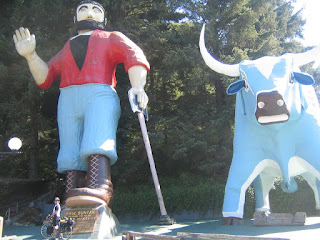 We came upon the Trees of Mystery, a goofy tourist attraction with a talking, 100 ft tall Paul Bunyan statue who was accompanied by an equally large Babe the Blue Ox. At first we thought it was a recording, but then the statue started asking us where we had ridden our bicycles that day and where we were headed, and told us to be safe! A very funny tourist attraction, actually.

Soon we started our second large climb of the day, back into the Redwoods. The climb was really steep-- too steep for me tugging the trailer-- so Chad took my backpack out of the trailer and wore it the rest of the way up (and still finished the climb ahead of me!). At the top, we took a small hike down an interpretive trail that explained the process of a road removal project that had been completed there. It was pretty incredible-- it is not that they just let the plants grow up, they actually regrade the hillside to its original topography, using heavy machinery, so that you cannot see at all where the road was. The idea behind this technique is that the natural drainage of an area is the best state for the area to be in. 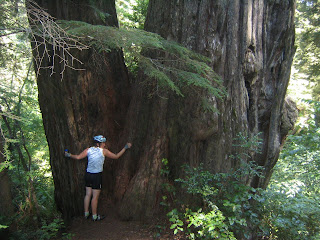 Along the trail we also saw some of the biggest Redwoods I've ever seen.... they were very spiritual trees. 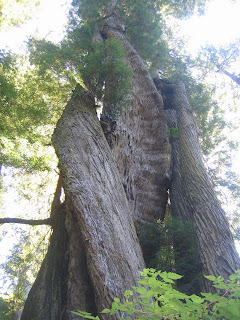 We enjoyed a nice descent back down, and stopped to take some pictures of Corkscrew tree, aptly named!

We continued on into Orick with the sun beating on our backs as we emerged from the Redwoods-- my thermometer said 98 degrees! We finished up our day at Patrick's Point State Park, which is one of the most incredible state parks I've ever visited. The hiker-biker spots were tucked behind some fantastic ocean cliffs-- a short hike took us out to the shore, where seals were bathing in the last rays of sunlight before sunset. The cliffs, seals and sunset made this one of our favorite days yet. 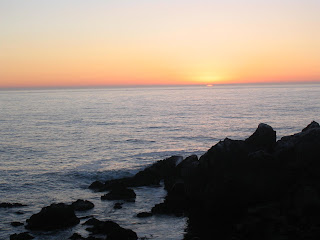 Yay, I'm so glad I got to see you guys in SF! I'm excited to see all of your picture from the trip especially of all the fun people you met along the way. I've spent the days since day dreaming about long bike tours and the bike nation that exists out there! I'm so impressed, well done!
Love Alyssa