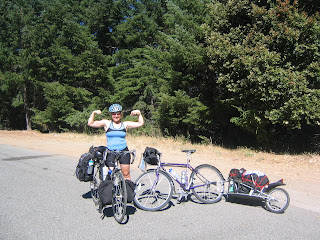 Almost immediately out of Richardson Grove this morning we started climbing. About 15 miles out of camp we said goodbye to the 101 and turned onto the 1, towards the ocean. We went up, up, up to the highest point on the entire Pacific Coast route, Leggett Hill. The hill, though we had been dreading it, was actually very pleasant-- gradual, windy, on a very lightly traveled road. The shady eucalyptus groves and the golden brown soil of the hills again reminded me of some of my favorite climbs in Berkeley (the pic is me at the top, celebrating!).

The descent was one of the longest I've ever done-- lots of windy corners in and out of the shade. We came around one hairpin and there were in two people in motorcycle jackets but with no motorcycles, sitting in lawn chairs by the side of the road, obviously smoking a joint. Only in Northern California! 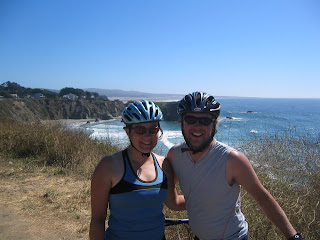 The next climb, Rockport Hill, was not as long but it was quite steep, and turned out to be quite a bugger. The way down was incredible, though, as we finally re-emerged at the Ocean, our first glimpse since Arcata. We stopped for a long leisurely lunch in Westport, where we were able to find, in a small convenience store, Brio bread, an organic tomato, a ripe avacado, and cheese from a town up the road called Lolita. Even in the tiniest towns here, you can get fancy cheese and organic produce. Gotta love it!

We hiked down from the store to a little park with picnic benches and a view of the ocean to enjoy our lunch. There we met a really nice guy named John who owns a bicycle shop in Chico, CA. We had a nice chat with him, then he returned to his book while Chad took a nap under the table and I looked at the ocean and planned our route for the next few days.

When we got back on the road we only had 12 more miles left for the day, but they were some of the toughest 12 miles I've ever ridden! The 1 winds in and out of countless canyons along this part of the coast, plunging down into the canyon, turning 180 degrees and then shooting steeply up back out towards the water, over and over again.

The scenery was spectacular, though-- lots of small ranches and wide-open grassland mixed with groves of trees, right along the sparkling Pacific. Chad and I decided that it would be pretty cool to own a litte vacation ranch here someday. 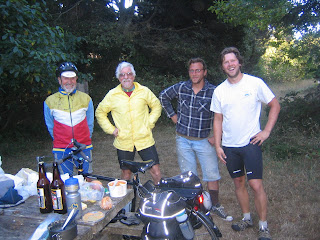 We ended the day at Mackerricher Beach State Park, where we bumped into our friend Daniel again, and also met two other riders-- John, a retired computer science professor who just turned 70 and is riding from Eugene to San Francisco, and Jack, a retired British plumber in his 70's who is riding from Vancouver, BC to MEXICO! Jack was a wonderful spirit for us to bump into-- he gave us a can opener and a booklet about good restuarants to try in the area, and kept us entertained all night with stories of trekking in Alaska and Ireland. 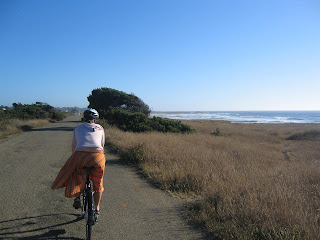 At some point Chad and I rode our bikes into Ft. Ross for dinner-- there was a really nice bike path from our campground to town along the beach, and, thankfully, flat for a change. We ate burgers (a veggie one for me) and french fries, then headed back to camp. At the camp entrance, there was a complete grey whale skeleton on display with a bunch of educational/ interpretive material, so we spent some time checking it out. We stayed up much later than we should have, but we really earned it-- we climbed 4458 ft. today!!! That was over 55.52 miles, with an average speed of 9.5 mph. Woo hoo! Our biggest day of climbing on the entire tour, we're pretty sure. And we feel great!
Posted by Megbikes at 9:42 PM