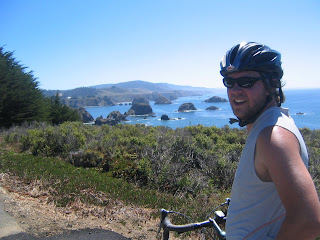 My legs were TIRED today from yesterday's monstrous climbing day, and I started out crabby. I think it was the combination of yesterday's exertion, rather heavy traffic on narrow roads, and innumerable short, steep, canyon climbs, but I just stayed in my bad mood for most of the day (poor Chad was very nice to me, but I'm sure got sick of my mood today!). We had talked about trying to do a long day today(70 plus miles), but decided to do only 40 miles, given the epic size of yesterday's ride. This turned out to be a good decision, because although today was short with less climbing than yesterday, it turned out to be a difficult day for me. 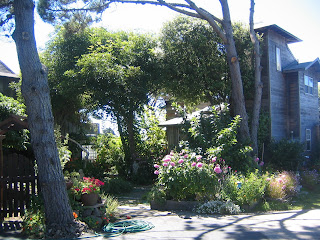 The scenery was beautiful, though, and around lunch time we stopped just north of Elk to check out a picturesque little resort with an art gallery and beautiful gardens. Shortly after lunch, we came to the steepest climb on the entire route, according to our guidebook. Thankfully, it was short. It was another one of these terribly steep swoops into and back out of a canyon, except this time the road wound through 2 haripins before coming to the top-- I think the grade was around 22%. I made it to the top of the fist hairpin with legs burning, gasping for air, and sniveling. I think this is a common thing among some female cyclists I know on especially steep climbs-- you get to a point where you are pushing yourself about as hard as you can go, and for some reason the emotions just take over and you start gasping and crying! No reason, really-- you just kind of crack emotionally. Anyhow, I stopped for a minute, let my breathing return to normal, and looked out at the ocean and realized that no matter how hard this ride is for me in places, I'm damn happy to be on it.

Once I had calmed down, I hopped back on the bike and pedaled slowly up the rest of the hill in a much calmer state than before. Chad was waiting patiently for me at the top, and we continued on. About 10 miles from camp, Chad started to want to hurry so that we could get to a store for some dinner food, but I was pretty beat so I told him to go ahead. Being alone for 10 miles was actually a nice break-- I got to go at my own pace without worry that Chad was waiting for me, and he got to go ahead at his own speed. 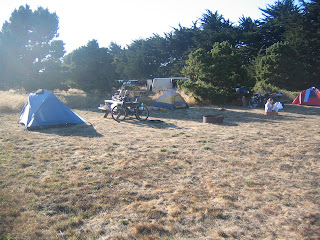 By the time I got to camp I was feeling better, despite the fact that our campground was pretty barren, with little shade cover and no showers. Oh well-- every other site has been so cozy and welcoming that you can't expect them all to be that way! Anyhow, Jack and John were at the site, so we visited with them for awhile, ate some light snacks for dinner, and then strolled down to the beach to watch the sunset. 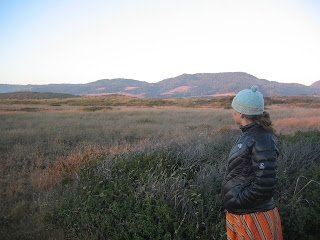 It was a particularly amazing sunset, which goes to show you that even on the most challenging days, these adventures have many gifts to offer.