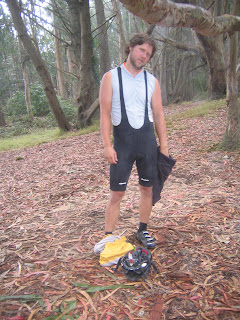 This morning we were tricked by a Eucalyptus tree, under which we had placed our tent the night prior. We woke up early and heard rain on our tent, so we went back to bed and slept in-- although we could have reached San Francisco today, we decided to extend our trip one more day and take our time today. When we woke up 2 hours later, it was still raining! Or so we thought-- when Chad stuck his head out of the tent, the only place it was raining was under the Eucalyptus tree! It was misty out, and the tree was especially adept at gathering moisture with its long, pointed leaves, and watering its own roots. Pretty amazing adaptation!The pic above is of Chad looking tricked by that tree. 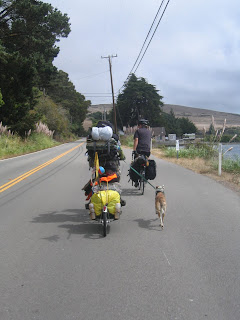 We rode into Point Reyes station-- but on the way in we came across this guy who had ridden 1000 miles so far, packed to the gills with stuff and RIDING WITH HIS DOG RUNNING NEXT TO HIM! He told us that the dog had 1000 miles on her, just like his bike. We felt sorry for the dog, but actually the dog seemed okay with the whole arrangement,so we opted to mind our own business rather than call animal control. Strange the things you see on a bike tour. This was the second dog we've seen on a tour-- the first was in southern Oregon, but that one was in a Burley-type trailer, watching the scenes go by.

When we got into Point Reyes, we stopped and chilled out for awhile, as we decided whether to stay there in Olema or head on to Samuel P Taylor. We soon saw Albrecht, who had stayed at Olema the night prior, at the price of $40! We decided very quickly that Samuel P Taylor would be a better choice. Albrecht decided the same thing. Not too much later, Jack came rolling into town, and his plan was also to stay at Samuel P Taylor! Not only that, but Frank and Rike, who stayed at the same campsite as Jack the night prior, were also planning on staying at Samuel P. Taylor, so we would have a reunion on our last night in town! 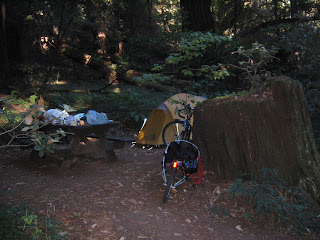 We got to camp and set up, in one of the most beautiful hiker biker camps to date. While the scenery was fantastic, it was the people whom we were more excited to see.
Albrecht arrived first, followed soon by Jack. Finally, Frank and Rike arrived, and we greeted them like old friends! 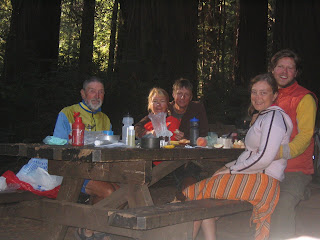 We stayed up very late talking, drinking a little wine, and enjoying each other's company in an amazingly beautiful backdrop, apparently one of the very first campsites in America to be promoted for recreational camping. The only down side to our last evening was that the raccoons scored a very smashing victory over us. Just after dark, they stole a bag of bagels off our table, then in the middle of the night they managed to steal most of our food supply out of the bear/ raccoon cupboard we put our food in. SNEAKY little buggers! Oh well. All in all, a great last night of this amazing tour. Today's stats: 41.91 miles, 9.6 mph avg, 2726 ft of climbing (my legs were again really tired today, due to yesterday's huge climbing).
Posted by Megbikes at 10:15 PM