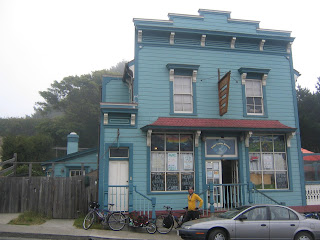 We started the day early in the morning mist and stopped for breakfast at this wonderful organic grocery store/ cafe. Chad had a huge egg, cheese and sausage sandwich and I had corn meal blueberry pancakes that were amazing. Not bad for a town of 525 people. Chad was pretty sure he saw Ken Kesey at the cafe, but we couldn't actually confirm that. As we were eating Jack and John both showed up-- Jack brought my favorite shirt, which I had left at the camp that morning-- so nice of him to look out for us! Unfortunately, Jack had decided to ride shorter than we were aiming for today, so we wouldn't get to enjoy his company for another night. We shopped for a few lunch snacks, and the shop owner gave us some free bananas, which were much appreciated. We also met a HUMUNGOUS chocolate lab named Webber who kept trying to sneak into the store.

We departed breakfast with happy, satisfied tummies, and began a short climb to the top. When I got there, I had a feeling my wallet wasn't with me-- looked in my bag, and sure enough, it wasn't there! I booked it back down the hill and there it was, sitting on the steps to the shop.

The first 35 miles were pretty easy and breezy-- our tail wind has returned! We took an early lunch and again enjoyed tomatoes, avacado, cheese, and whole wheat bread, with a banana, an orange, and a peach. 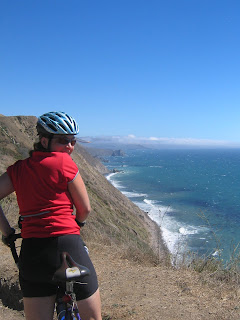 After lunch we began a climb that turned out to be much less challenging than I was expecting with absolutely EPIC scenery. The road was really exposed, and although the traffic was heavy, we were blessed again with road construction and a traffic light that pretty much made the road empty for us, as long as we let groups of cars pass. That wasn't a problem, because the scenery was so amazing. 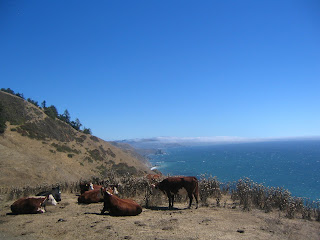 The cows along the edge of the bluffs were especially funny to me. The guidebook warned about cows jumping out, but they don't exactly jump. Mostly, coastal cows are not any more intelligent than inland cows, it seems, nor do they move any faster. 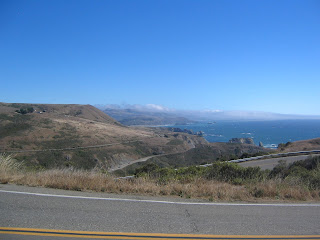 We had an amazing, spectacular descent into Jenner, along one of the windiest roads in CA. I saw a postcard advertising it as Dramamine Drive because you are forced to stay awake while driving it. Looking at it from the top, the road looked like a giant piece of grey ribbon candy with a yellow stripe. At times on the way down, around the corners, I felt inverted momentairly, the hairpins were so sharp and you changed pitches so quickly. 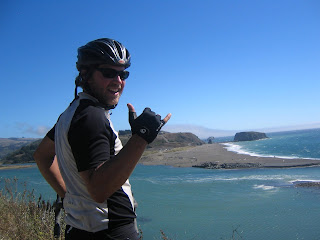 At the bottom, Chad stopped and looked over a cliff into the bay that the Russian River flows into, and saw a bunch of seals playing in the water. Turns out they do more than just sunbathe, and watching them in the water was really entertaining.

We climbed out of the Russian River gulch, and from that point on the traffic became almost intolerable-- it was Labor Day, and by the late afternoon we felt like we were nuts to be riding. Although drivers were very polite, the motorcycles' noise freaked me out, and by the end of the day I was very happy to be off the bike. We set up our tent under a big eucalyptus tree at Bodega Dunes State Park, where it was hauntingly quiet after such a big day. After setting up camp, we rode into town and spoiled ourselves with fish n' chips and fish tacos. All in all, an amazing day. When I looked at our stats for the day, I could not believe it-- 4547 feet of climbing! 68.65 miles, 11 mph average! While I'd like to claim we are just getting stronger, our huge tail wind definitely helped out our mph over that many hills. This was our hilliest day.
Posted by Megbikes at 9:21 PM