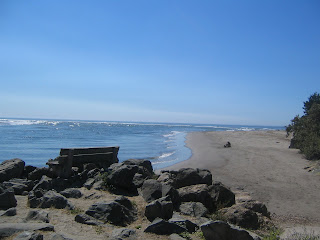 We woke up this morning and sadly said goodbye to everyone. We opted to back track a little bit and ride the 1 all the way into the city, rather than sticking with the shorter, flatter route along Sir Francis Drake Boulevard, because I wanted to see the spectacular scenery along the coast line. Jack and Albrecht were doing the same
route as us but left much earlier in the day, and Frank and Rike opted for the short ride as Rike had 2 more broken spokes and they were anxious to get in and get off the bikes. 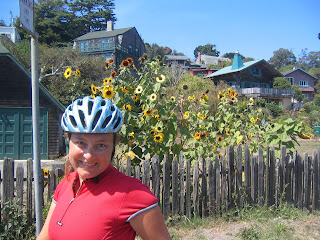 Chad and I stopped for lunch in Bolinas, one of the most offbeat, hippie, cool places I've ever been. It is located just across a narrow channel from Stinson Beach, but to get there by car you have to drive around a sizeable bay. The locals are very protective of their town, and the county has stopped putting up road signs that point to Bolinas because every time they put one up, someone from the town takes it down. I was thinking, as we rode into the town, that Bolinas is also unique to me because while I've visited it exactly three times, I've arrived by bicycle to visit it exactly 100% of the time. I think I'm going to make a personal rule, actually-- Bolinas will be a place where I will only allow myself to arrive by bicycle. 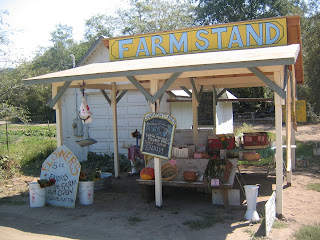 Perhaps the other thing that draws me to Bolinas is the town's heavy emphasis on organic agriculture. Something about the proximity of the farms in Bolinas to the beach makes me think that this would be a great place to retire to, should Chad and I ever decide to take a break from the daily grind and become farmers. Anyhow, I bought lunch at one of my favorite haunts, the People's grocery-- it was a yummy tofu curry sandwich with peas and carrots-- something I'm not usually that into, but that was excellent today. Then again, everything tastes great when you're riding your bike all day. 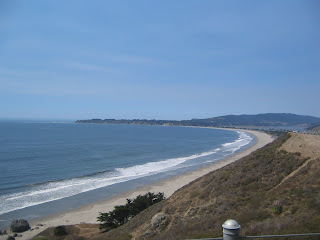 We left Bolinas, rode around the bend and began the breathtaking ascent south of Stinson Beach. It was every bit as glorious as I remembered, and I hope that Chad felt the same way! 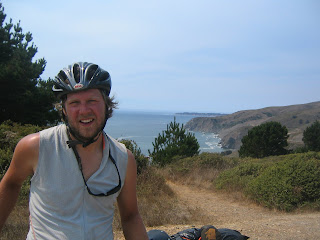 We continued up through another brutally steep section of coastal ascent-- my inclometer read 23%! This time I didn't gasp or start crying-- I just stood up and powered through, and I heard Chad give a mighty yell in front of me as he did the same. 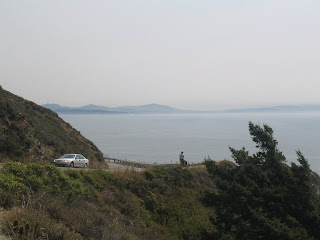 At the top, we stopped to look around at some of the most spectacular scenery of the whole trip. We caught our first glimpse of the city, lying just beyond the Marin headlands. I got sooo giddy... but there was still lots of scenery to see. Just above Muir Beach, we headed inland to see the Muir woods national monument. I thought it was a fitting thing to do, given the impact that John Muir had in preserving all of this amazing land for everyone to enjoy. I spent a long time in the gift shop while Chad took a nap outside-- it was nice to reflect on Muir's contributions to our collective environmental consciousness, and to read some of his quotes and thoughts. 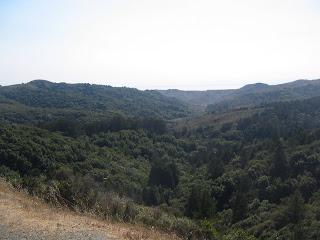 We climbed out of the Muir Woods National monument and were greeted with another spectacular view of the Marin Headlands, stretching out for miles to the east of us. The descent down was bittersweet-- amazing, fast, fun, and familiar, but also a little melancholy because it was the last real descent of our journey- we were nearly at the end of a three week odyssey into an adventure neither one of us knew anything about before we left. There wasn't much time to be sad, though, because the Golden Gate lay just ahead.

We finished our windy descent down into Mill Valley, past cousins Clint and Cori's homes, and dodged traffic to get onto the bike path, right past Mike's Bikes of Sausalito. It felt great to be back in familiar territory, where my love affair with the bicycle began. How fitting to arrive by bicycle! 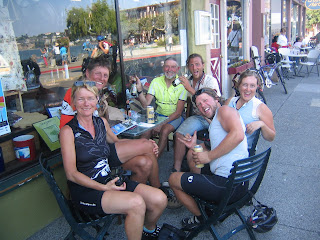 As we rolled through Sausalito and were enjoying the views of the Transamerica tower, we had a big surprise-- there at the pub on the sidewalk, Frank, Rike, Jack and Daniel were waiting for us with COLD BEERS! What an amazing surprise. We laughed like old friends and hugged, then sat down to enjoy our beers.

When we were done, we all decided to ride across the bridge together... a fitting end to an incredible journey with our wonderful friends from the road. Truely an adventure of a lifetime! 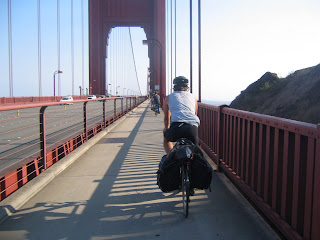 Here's Chad, going across the bridge. 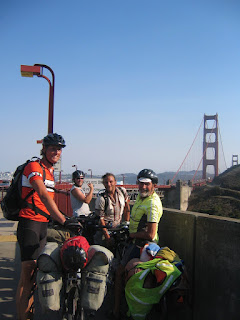 A picture of the boys, celebrating their victory! 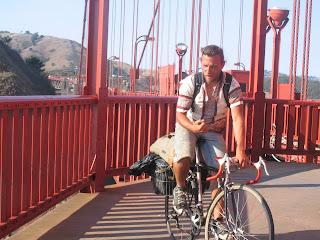 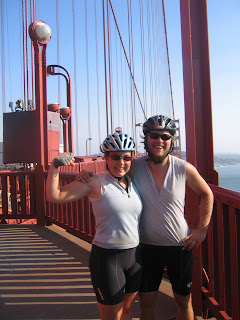 Chad and I, paused for a photo op in the middle of the bridge. The weather is of course absolutely fabulous. Yeee hawah! 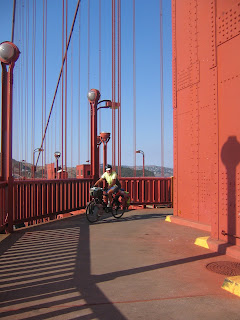 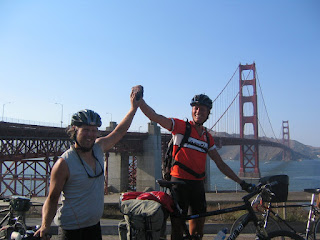 On the other side, Frank and Chad giving a mighty high five. 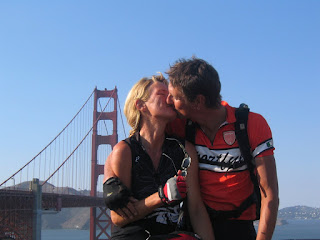 Frank and Rike celebrating their love for bikes and for each other! 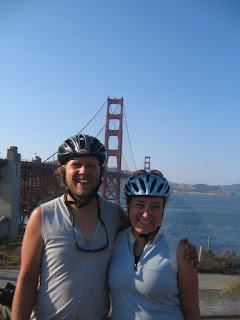 Hi Megan! Thanks for your comment, it was great to hear from you. we both failed miserably at updating as the trip wound down, but we were having a good time. And it looks like you guys did too!