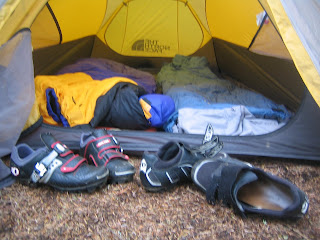 This morning poor Frank woke up with the stomach flu. Chad and I said goodbye, exchanged email addresses, and talked about meeting up with Frank and Rike later in the trip. We left relatively early from the campground and started out on our hilliest day yet. The first two climbs of the day were over 500 feet each. To get to the top of the second climb, we had to go through a tunnel, which would be scary except they have a button you can push that activates lights on a sign that says "bicycles in tunnel." Oregon is so bike friendly, it is making this tour really care-free for us. Anyhow, the view from the top of the climb was spectactular. 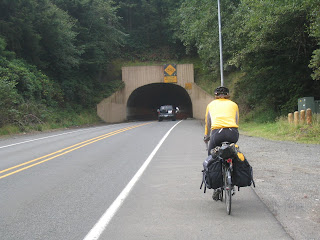 We stopped for lunch at the beach in Rockport, where a small juvenile seagull convinced us to share our lunch. We kept going through the town of Tillamook, OR, and reached our campground much earlier than expected. This is by far the best campground so far-- $4 per person for a beautiful campsite right on the ocean, and that price includes a hot shower! 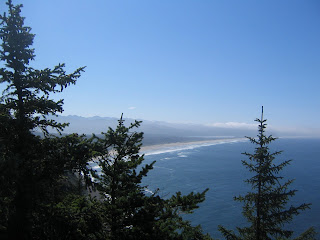 We got in to camp early and relaxed, and on our way back from the showers we were amazed to see Frank and Rike! Frank spent the morning sleeping, and they rode all afternoon to catch up with us. So our trip with our German friends continues! Today's stats: 51.7 miles, 11.4 mph average, 2631 ft of climbing. Hilly! 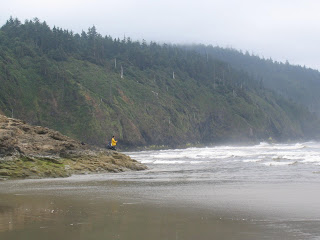