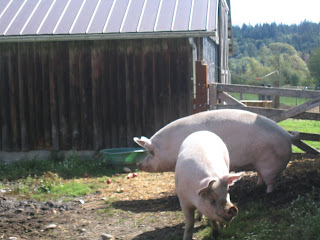 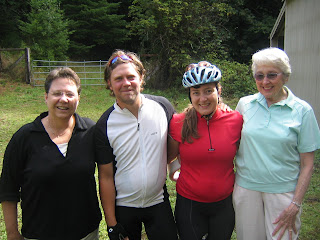 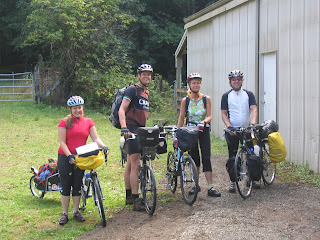 This morning Edie made us an amazing farm breakfast-- eggs, tomatoes, fresh sweet rolls that Edie's daughter Shayne made, and lots of watermelon. She is quite a special woman-- a shining example of what makes the "greatest generation" great with her pluck, her graciousness, her cheerfulness.


On the way out we took a little detour to see the farmhouse that my mother grew up in. The trees had grown up quite a bit and I wanted to have a look at the old barn, so I knocked on the new owners' door and made friends! They were the nicest people-- David and Cathy-- and they gave me an impromptu tour of the place, which has been kept as neat as a pin. They also have the most humungous hogs I have ever seen..... I will post pictures of them when the computer facilities we visit allow me to.

We took some back roads to Montesano, and enjoyed some time without the traffic of the busier roads. The weather went from marginal to decent and back again, although by the time we reached Aberdeen we had some sunshine. In Aberdeen I saw a Star Wars Store-- perhaps the first one of its kind I have ever witnessed! We didn't stay to look, but I thought it was a pretty funny thing.

We arrived at our campsite near 5pm-- we've been leaving later riding with Frank and Reke, but we are much more visible with 4 people, plus we can move a little faster, as Chad and Frank can take turns leading. Twin Harbors State Park, our campground, was nice-- nothing too fancy, but a great hiker-biker area with hot showers, nice in the rain!

We rode into town to have a nice dinner and get some groceries, and stopped to ask a policeman for directions. Chad approached the parked police car, but to his surprise there was a dummy in the driver's seat, not a real cop at all! That was definitely the funniest part of today-- what small town puts a dummy in a cop car to scare people? ! We spent awhile posing with the cop car then found a decent, although very rowdy, place for dinner.

We got to bed late, as the rain started again-- but we've been staying very dry at night in the tent, so it hasn't bothered us much.