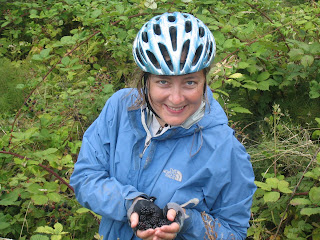 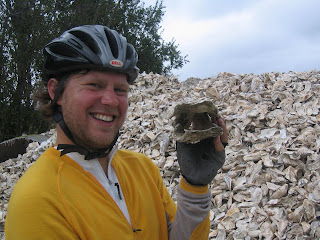 Greetings! It is still raining and we are still riding with the Germans. We've learned that "schneke" is the German word for slug-- we've seen many slugs so we've learned the word quite well! Chad has also been catching up on his German cuss words that he learned in high school.

The ride today was pretty mellow and relatively uneventful-- we've been doing less mileage than we've originally planned, but the bikes are REALLY heavy and it is much more enjoyable for now to keep the mileage a little mower. Hopefully once we get into Oregon we can kick it up a little, but for now with the rain and some headwinds, this is plenty.

This part of the state is very different than places I've been-- the towns are small and not very touristy, and people seem to just be eking out a living. This morning before we left Chad and I got up early and strolled out to the beach, which was extremely beautiful but VERY desolate. Chad commented that the homes we saw, although beautiful, seemed to be trying to "make friends with the desolation." I thought that was very fitting.

To get to the beach we had to pass through the most amazing stunted-growth forest-- I'm not really sure about its natural origins, but it was filled with stooped, stunted trees and knee-high grasses and sedges. The trees were black and looked nearly dead, except their tops, which were only 20 feet above the ground. It felt as though we were in an alpine or sub-alpine zone, which is probably a result of the crazy weather this place sees in the winter.

We cut our day a little short and opted to stay in Bay Center, a cute fishing village with more dogs than people, although both the dogs and people were really friendly. On the way in to town we passed piles and piles of oyster shells-- an amazing site (pictures coming soon). We opted to stay at the KOA to take another hot shower in the rain, which was nice, but we were quite a contrast to the RV'ers staying there. Frank and Reke can't get over the RV'ing phenomenon here in the states-- they are astounded by the size of the motorhomes, especially the ones pulling SUV's behind them. They are also flabbergasted by the selection in the grocery stores! Anyhow, tomorrow will be a long haul. Today we had another short one: 50 miles, 921 feet of climbing, 12.2 mph average.
Posted by Megbikes at 4:57 PM